Back from orbit, Richard Garriott stakes claim in cyberspace 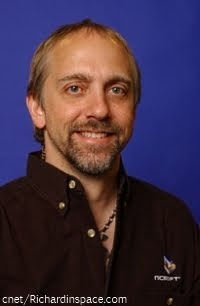 Back from a stint in outer space--literally--famed video game designer Richard Garriott has returned to his roots with a new social gaming start-up, Portalarium.

Known as "Lord British" and considered one of the industry's legends for his pioneering work on Ultima and Ultima Online, as well as his leading roles on Lineage, City of Heroes, and Tabula Rasa, Garriott most recently grabbed headlines by paying eight figures for a trip aboard a Russian rocket to the International Space Station.

Now, Garriott has come back home, literally and figuratively. On Wednesday, he formally announced his next venture, a social gaming start-up known as Portalarium that will get things going with a Facebook poker game, but intends to expand "into content that includes open learning, open health, open science/environment, open government and much more, all wrapped in a connective virtual world in the online social networking space."
Read the full post, HERE.
Posted by Joel Raupe at 4:21 AM