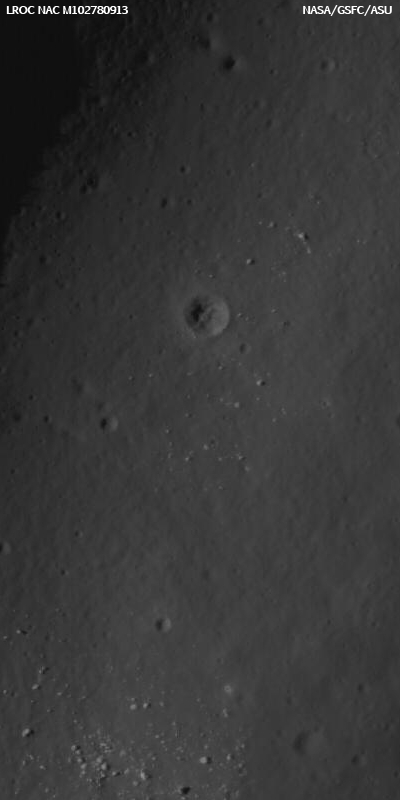 As Charles Wood of Lunar Picture of the Day (LPOD) has wisely pointed out, the full-scale half-meter per pixel resolution of the Lunar Reconnaissance Orbiter narrow-angle camera (LROC NAC) is so powerful much of the necessary context telling us what we are seeing is lost to casual observation. NAC Scan M102780913, for example, covers a very diverse but thin strip of the interesting southern extremes of Mare Orientale. In the sample, roughly 200 x 400 meter view above we see an optically mature, small middle-aged crater and an assortment of human-sized boulders. Upon stepping back a little from the scene below, and the same location can be understood better as mostly of debris gathered at the bottom of an ancient trench. In a still-larger context, a map or image, and that trench could be seen as part of a criss-crossing network of cracks and fault lines that are a long-known feature characteristic of southwest Orientale's impact zone near the pyroclastic vent zone on the Mare's southwestern flanks. To many, LRO's camera products, with a lot of notable exceptions, lacks the drama we have become used to in standard lunar photography. To the those with even a passing interest in lunar morphology, however, the long-anticipated full range of LRO's data presents a deeply satisfying, nutritious full-course meal that will take decades to digest [NASA/GSFC/Arizona State University]. 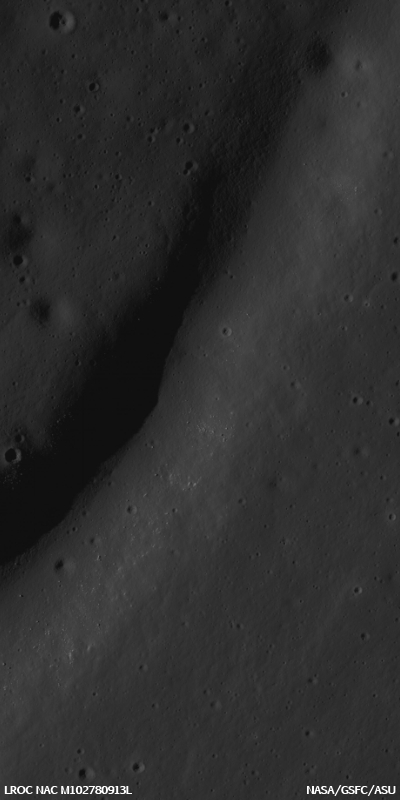 Joel Raupe
Lunar Pioneer
We were caught a little flatfooted earlier this week by a happenstance glance over at the LRO node on the Planetary Data System (PDS). In fact today, February 18*, is currently listed there as the date for the first public releases of data from most of the experiments orbiting the Moon, only six months into the planned two year mission of NASA's Lunar Reconnaissance Orbiter. With very little discernment it's become clear that several monasteries and hundreds of monks could happily spend entire lifetimes pouring over what is already many libraries of data.

Even then, they probably wouldn't see "the big picture."

Even a humble mission like Lunar Prospector (1998), after all, was still presenting investigators with new discoveries gathered from data that was still being studied a decade after it was deorbited near the lunar South Pole in 1999. And long after LRO shares that same fate investigators will be referencing LRO's datasets as a definitive new atlas of the Moon.

No one human or single team will be able to take it all in. Tomorrow comes but ten days before the beginning of March, the long advertised time for the appearance of what is expected to be a tsunami of data.

Mark Robinson's LROC team at Arizona State University has already released two preliminary sets of "pre-release" image datasets, mostly gathered during the commissioning phase of LRO's mission prior to last September and covering the lunar poles, Orientale and under-explored areas of the farside west to the 180th meridian.

Unfortunately, during our delayed attempts to examine the second of LROC's pre-releases this past weekend we encountered persistent problems hooking up with Arizona State University's deep storage servers where it is stored. By this past Monday, all the LROC assets became unavailable on the web, testifying of some major hassles for the only one of LROC's many experiment teams that has, so far, presented a friendly face to average hard-working taxpayers.

It's unfortunate, but with Robinson's LROC team we're bound to be patient.

Of each of LRO's science teams, LROC has easily been the most accommodating to the public, beginning with the release after last summer's First Light of the vehicle's first looks at each of the Apollo landing sights. Since then they have gone to what has to have been a lot of trouble to release at least one full Narrow Angle Camera scan, with good scientific context, on average about twice per week.

That effort has probably gone a long way toward placating thousands of us who have been anxiously awaiting for one of LRO's unique and remarkable close looks at a favorite target, and that's a long "wish list."

Putting together the full atlas of LRO's range of data for the whole Moon, or even for a single target, will require years. We can hope a that even a preliminary LROC wide-angle camera atlas of the Moon might become available soon, among other things. Aside from those breathtaking Apollo landing sites, relocating Surveyor 1 or the fresh impact baseline presented to us by the first image of the Apollo 14's Saturn third stage strike zone, our aforementioned, highly recommended patience makes us hesitate to mention other long sought answers to questions we already suspect the LROC to have nailed.

One challenge, perhaps even for LRO, will be to definitively locate Luna 9, on the western edge of Oceanus Procellarum; site of the first soft landing on the Moon by the Soviets forty-four years ago this month. Russian scientists are prepared for LRO's first look at the less mysterious Lunokhods, so far the only unmanned lunar rovers to be teleoperated on the lunar surface.

Abdrakhimov & Basilevsky of the Vernadsky Institute have digitized the panoramas gathered using the rovers during their the many-kilometer-long tours on the edges of Serenitatis and Imbrium. They are presenting their paper in absentia to the 41st Lunar and Planetary Science Conference at The Woodlands, Texas, March 1 - 5.

* UPDATE: Five hours after this posting, "Release 1 of" data from each of the seven LRO experiments to be featured on the Planetary Data System Geosciences Node were individually noted "scheduled for February 18, 2010." However, at the top of the overall LRO hierarchy the following note had by then appeared, "Release 1 of LRO data is scheduled for March 15, 2010." Alas for the mixed messages presently seen there, those who intend on making any use of data from LRO would be wise to bone up on the overall LRO archive plan found at the PDS and that of each of the seven experiments linked there.