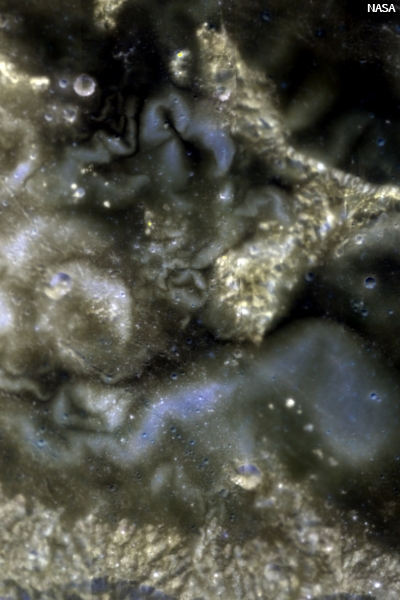 In a photograph credited to the orbiting crew of Apollo 10, inside 310 kilometer-wide Mare Ingenii (33.7S°, 163.5°E), mostly southwest of mare-flooded Thompson crater, the Moon's far side hosts perhaps the most dramatic (but by no means the only) wide-spread field of easily resolved lunar swirls. Beyond the upper left are the antipodes, the precise opposite side of the Moon from the center of near side Mare Imbrium, suggesting complex magnetic field lines is the wider vicinity here were shock-fossilized by the 3.8 billion-year-old impact. Now, the mystery here has been in gaining a better understanding of the persistence of the bright surface markings, regolith that has escaped the darkening of "optical maturity" within those magnetic field lines. This maturing should have gained a foothold within an estimated 900 million years. The field lines may remain sufficient to shield the surface like an umbrella from solar particle events but not from a continuous in-fall of micrometeorites or higher-energy cosmic rays. Those influences regularly "garden" the whole of the Moon's outermost surface every 2 million years. Garrick-Bethell, Head and Pieters suggest a mechanism, part of a net cycle of lunar dust migration. A diurnal polarity shift of electro-statically charged sub-micron dust grains are first repelled from the surface, as elsewhere on the Moon, but a net volume of charged dust is repelled during fallout.
Joel Raupe
Lunar Pioneer

Congratulations to Dr. Ian Garrick-Bethell, and colleagues James W. Head III and Carle M. Pieters of Brown University for having spelled out a likely connection between the Moon’s dynamic and dusty exosphere and the enigmatic swirls on the lunar surface that accompany crustal magnetic fields. Their presentation was delivered a few weeks ago at the Lunar Dust, Plasma and Atmosphere: The Next Step workshop at the University of Colorado at Boulder. Lunar magnetic anomalies and the wide array of swirls that accompany them on the surface of the Moon have been a particular area of science interest for us for many years.

We thought so much of this paper we dedicated this 2000th posting at Lunar Networks to “spotlight” it, as we begin discussion of the papers and presentations regarding the Moon submitted to the 41st Lunar and Planetary Science Conference, March 1-5, The Woodlands, Texas.

Abstract. Lunar swirls are sinuous or patchy albedo anomalies associated with strong crustal magnetic fields. Spectral properties across swirls are consistent with lower space weathering but also suggest an enrichment of feldspathic material within the swirls (1).
Both of these properties are plausibly explained by fine-grained dust sorting. The sorting may result from two processes that are well established, but have not been previously considered together. The first process is the vertical electrostatic lofting of charged fine dust. Lofting of dust has been inferred from numerous lunar surface experiments (e.g. refs. 2 & 3). The second process is the formation of electric potential anomalies formed at magnetic anomalies as solar wind protons penetrate more deeply into the magnetic field than electrons. The generation of these electric potentials has been inferred from Apollo 12 and 14 surface measurements (4,5), and has been experimentally simulated (6). The electric potential can attract or repel charged fine-grained dust that has been lofted. Since the finest fraction of the lunar soil is bright, enriched in feldspar, contains the most nanophase iron, and contributes significantly to the lunar regolith spectral properties, the horizontal accumulation or removal of fine dust can change a soil’s spectral properties.
We calculate that grains can be transported on the order of typical swirl length scales on timescales comparable to the most rapid estimates of space weathering. For example, a 5 μm radius grain with a charge of 5.5 X 10(-15) C will be transported 5 km after 100,000 years, assuming 6-second-long loftings every terminator crossing, and electric fields comparable to those inferred at the Apollo 12 and 14 sites. This mechanism can explain some of the spectral properties of swirls, accommodates their association with magnetic fields, and permits weathering by micrometeoroids and the solar wind. 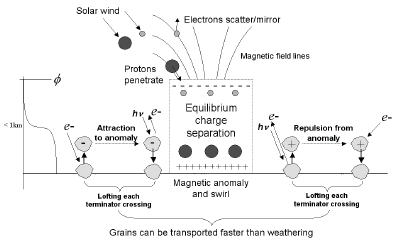 Joel-
Congratulations on 2000 postings! That is quite a record of interesting comments and images about the Moon.
Chuck Wood