LROC - Out of the Shadows: Impact Melt Flow at Byrgius A 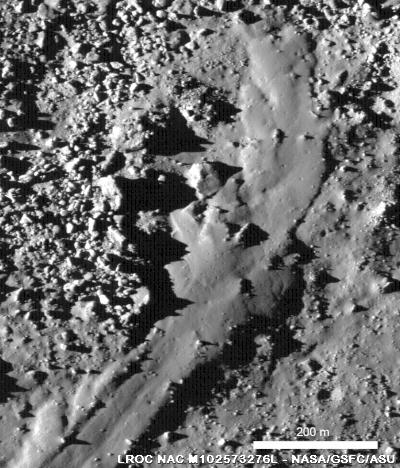 Spectacularly preserved viscous flow on the NE rim of Byrgius A (19 km diameter) crater. This flow has a form similar to lava flow on the Earth - however this lunar example formed as a result of an asteroid or comet slamming into the Moon at hyper-velocity (>16 km/second). So much energy was released in the impact solid rock was melted and thrown from the crater where it flowed down the crater flanks (M102573276L, enlarged image here is 810 meters in width.) [NASA/GSFC/Arizona State University].
B. Ray Hawke
LROC News System
Byrgius A (19 km in diameter) is located west of Mare Humorum at 24.5°S, 296.3°E. Lunar geologists have known since the Apollo era this Copernican-aged crater is surrounded by an extensive system of bright rays, and its ejecta blanket is rough. Newly acquired LROC Narrow Angle Camera images reveal an exquisite state of preservation among many features related to to this young crater's formation. These spectacular geologic features include impact melt pools, flows, levees, lobate margins and delicate coatings on the crater interior.

Because of the rain and wind that weather terrestrial counterparts, you can't find ancient craters this well-preserved on Earth. However, you can find them on the Moon, where a record of almost four billion years of Solar System impact history is preserved.

Understanding the impact history recorded on the Moon is a key objective of future human lunar exploration. Exploring stunning features like the one seen here will provide key insights into the geologic history of the Moon, Earth, and the other terrestrial planets.

Deposits of lava-like material in and around young lunar crater. Initially thought to be volcanic because of their flow-like morphology, these deposits are now known to have been formed by high shock pressures and related melting of materials at the impact site. Lunar impact melt deposits are observed as thin veneers, flows, and ponds. The state of preservation of these features tells us that the crater is relatively young - but how young?

Recent age estimates from Japan's Kaguya placed the Byrgius A impact at about 48 million years of age, an age estimate that will eventually need to be confirmed by collecting samples.

The spectacular leveed flow is about 3.2 km from the crest of the crater rim. Distinctive lobes and surface flow features are seen 800 meters from the end of the flow, and the flow averages 130 meters wide in this area Both a primary (80 meters wide) and an inner channel (~10 meters wide) are apparent.

The delicate morphology of these features are enhanced by the extremely low Sun angle (75°) and the local tilt of the rim away from the Sun. The main flow terminates in a series of digitate lobes.

Explore the full resolution NAC frame and see how many other impact features you can find! 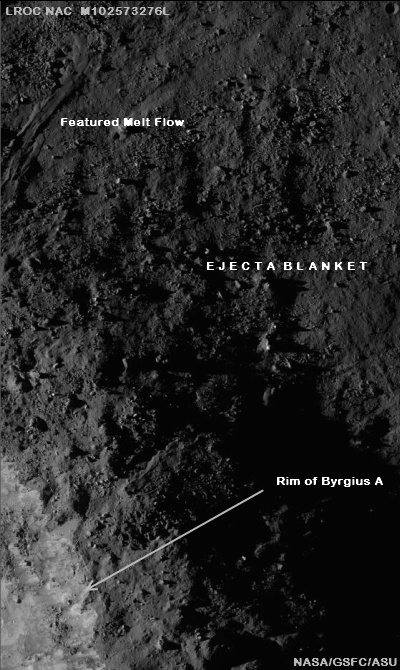 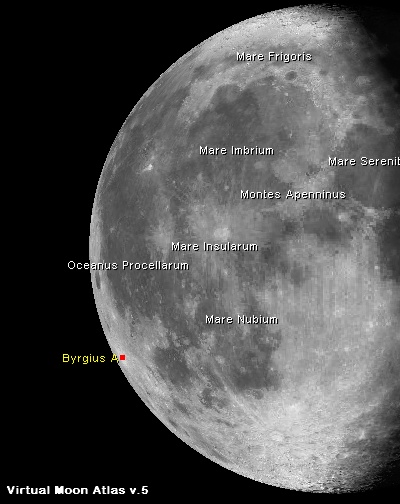