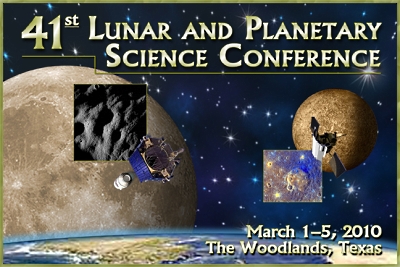 1:30 p.m. Barr J. A. * Grove T. L. Primordial Lunar Mantle Melts and Assimilated Magma Ocean Cumulates: Implications for the Depth of the Lunar Magma Ocean Based on Ultramafic Glass Compositions [#2427] We have developed a model to predict the chemistry of primordial lunar mantle melts. These model melts can be used in mixing calculations to help constrain the depth of magma ocean cumulates, and by association the depth of the lunar magma ocean.

1:45 p.m. Elardo S. M. * Draper D. S. Shearer C. K. Magma Ocean Composition and the Lunar Mantle: Implications for the Source Lithologies of the Highlands Magnesian Suite [#1450] Experiments have been conducted on two bulk Moon compositions to assess whether the earliest cumulates from the lunar magma ocean could have served as the source lithologies for the Mg-rich, Ni, Co and Cr- poor mafic silicates of the Mg-suite. 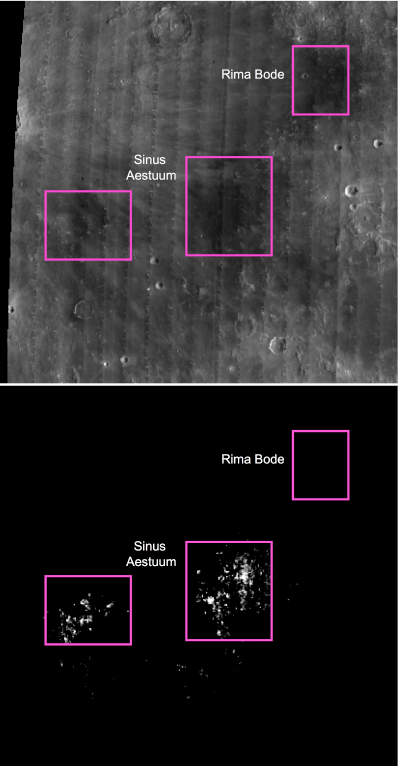 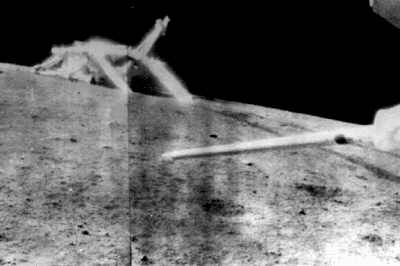 A month after the departure of the last Apollo mission, Soviet lander Luna 17 is examined by Lunokhod 2, which had just delivered the second of only two unmanned rovers ever to explore the Moon to Le Monnier Crater, near the edge of Mare Serenitatis. "The solar-powered Lunockod 2 rover operated for about 4 months on the surface, covering more than 37 km of terrain, including hilly upland slopes and rilles. It returned 86 panoarmic images and more than 80,000 television images.

Eldridge D. L. Korteniemi J. Lough T. Singer K. I. Werblin L. Kring D. A. Sampling the Youngest and Oldest Mare Basalts: Important Lunar Regions [#1486] Basalts spanning the duration of lunar mare volcanism are incompletely sampled. Presented here is a brief summary of the current knowledge of mare basalt ages and a set of exploration targets where the youngest and oldest mare basalts may be found.

Evans R. Lena R. Wöhler C. Berezhnoy A. Mons Hansteen: Morphometry, Petrographic Mapping, and Mode of Emplacement [#1475] This contribution describes the determination of the morphometric and rheologic properties of the lunar highland dome Mons Hansteen. Furthermore, the abundances of several elements are estimated for Mons Hansteen based on multispectral imagery.

Kozlova E. A. Lazarev E. N. Crater Cabeus as Possible Cold Trap for Volatiles Near South Pole of the Moon [#1779] Crater Cabeus has been chosen by NASA as a target for impact experiment of LCROSS mission. On the basis of topographical data from KAGUYA we made a topographical model of Cabeus, the illumination map for crater and investigate the temperature distribution in crater.

Lena R. Woehler C. Phillips J. Berezhnoy A. An Effusive Lunar Dome in the Light Plains of the Crater Meton [#1470] A lunar effusive dome is identified on the floor of the crater Meton on typical light plains material, suggesting the occurrence of non-mare volcanism in the light plains regions.

Li X. Wang S. Tang H. Zheng Y. Primitive Results from Passive Microwave Exploration in Chinese Chang’e Lunar Mission [#1036] A microwave radiometer was loaded in the Chinese Chang’E lunar mission and a lot of data was received. By analyzing these data, some characteristics of brightness temperature and primitive results have been obtained.

Lu Y. Correlations Between Iron Abundances and Lunar Surface Features: Crater Kepler Area [#1258] Since iron is one of the major mineral forming elements on the Moon, iron abundance can show composition and the stratigraphy of the lunar crust details, and it can help us to understand the formation, distribution and variety of lunar mare basalts.

Mendell W. W. Noble S. K. The Epiregolith [#1348] Successful models of the non-Lambertian character of lunar surface albedo and emissivity imply the existence of a lattice-like layer, several particles thick, where photon interactions occur and which may be the product of grain charging by the solar wind.

Mendell W. W. How Cold Are the Floors of Lunar Polar Shadowed Craters? [#1352] The epiregolith in permanently shadowed polar regions may have a very fine size distribution, leading to greatly reduced emissivity at wavelengths >100 μm. Diviner readings in this situation may not be a reliable representation of the physical temperature.

Pugacheva S. G. Sv. Shevchenko V. V. Vl. The Chemical Composition of Regolith at the Moon’s South Pole, According to Data of Lunar Prospector and Lunar Reconnaisance Orbiter Missions [#1297] Comparative evaluation of the chemical composition of the soil matters in the lunar craters with “cold traps.”

Slyuta E. N. Abdrakhimov A. M. Basilevsky A. T. Lazarev E. N. Dolgopolov V. P. Sheikhet A. I. Landing Sites for the Russian Luna-Resurs Mission to the Moon [#1141] Considering that mission will be in October 2012, two landing sites have been selected, both in the south pole region: #1 (basic), and #2 (back-up).

Tang H. Wang S. Li X. Experimental Simulation of Nanophase Iron Production in Lunar Space Weathering [#1041] In the study, an experiment using microwave heating and magnetron sputtering techniques to simulating nanophase iron both in glass phase and on the grain surface is proposed.

Velikodsky Yu. I. Opanasenko N. V. Akimov L. A. Korokhin V. V. Shkuratov Yu. G. Kaydash V. G. Kharkiv Absolute Photometry of the Moon [#1760] A two-month series of quasi-simultaneous imaging photometric observations of the Moon and the Sun has been performed at Maidanak. New values of lunar albedo have been obtained. They turn out about 15–25% higher than that in previous works.

Wöhler C. Lena R. Pau K. C. Lunar Intrusive Domes on the Floor of Grimaldi and Near Aristillus [#1478] In this contribution we examine two large lunar domes of probably intrusive origin. The morphometric properties of the domes are derived, and geophysical parameters (intrusion depth, magma pressure) are estimated based on modeling.
Posted by Joel Raupe at 1:05 PM