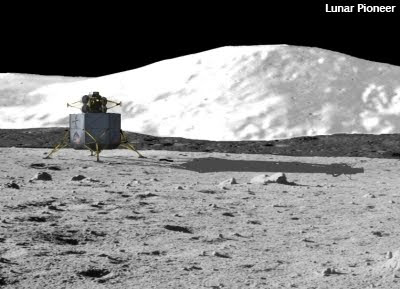 A notional scene showing the besieged Constellation lunar lander Altair, composed of Apollo, LRO, Kaguya & Google Earth data to create an "accurate-looking" scene of a landing near the wrinkle ridges and ghost craters of southern Mare Crisium. The site is among fifty Constellation "Regions of Interest."
Taylor Dinerman
The Space Review

Whatever her motives were, when Senator Barbara Mikulski (D-MD) destroyed the George H.W. Bush Space Exploration Initiative in 1992, she demonstrated how a single powerful senator could wreck any president’s proposals, especially on a seemingly marginal issue like civil space policy. She went through the NASA budget and zeroed out anything that even remotely resembled funding for SEI. It took NASA many years to recover from those drastic cuts to the human space exploration technology program.

The resentment aimed at SEI is nothing compared to what the NewSpace industry now faces on Capitol Hill. The cancellation of the Constellation program proposed in the 2011 budget is facing a bipartisan firestorm in Congress. It is doubtful that the President will want to make a special effort to support the new NASA program. His threat to veto the 2010 defense budget if it included money for the alternative F-35 engine turned out to be empty. The thousands of jobs and the irreplaceable expertise that this new plan throws away are far more important to the members of Congress, especially in the current economic climate, than are the arguments and promises from the new team at NASA.

In spite of its flaws—and if anyone says there is such a thing as a flawless government program ask them what they’ve been smoking—Constellation balanced the technological, political, and legal realities of today’s government environment. The new program is the product of a philosophy that, while it may be promising in the very long term, is simply not ready for prime time.

If the Moon program could be described as belonging to the 20th century, the NewSpace industry is beginning to look as if they belong to the 18th century. Like French courtiers wandering the halls of Versailles looking for a favor from the King, individuals who used to be regarded as brave entrepreneurs will now haunt the corridors of power looking for a subsidy or an earmark. They will prove their technical expertise by writing proposals that are perfectly adapted to the prevailing bureaucratic winds. It may be good business, but it does not have much to do with 21st century market capitalism.

Now that the NewSpace industry is in a direct fight with the powerful members of Congress they may find that in spite of support from NASA’s leadership, they lack the political strength overcome the opposition. If the men and women who sit on the appropriations committees feel their interests and even their political survival are threatened, they will strike back, and strike back hard.
Read the full article, HERE.
Posted by Joel Raupe at 5:19 PM

Buy Research Paper said...
This comment has been removed by a blog administrator.
February 16, 2010 at 6:39 AM