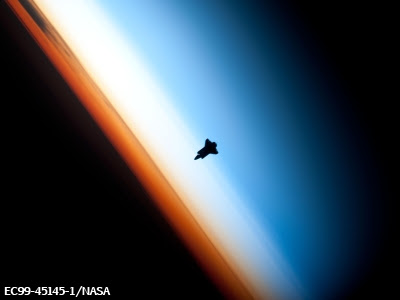 Watching NASA-TV during rendezvous and docking of Space Shuttle Endeavour and the International Space Station, Wednesday viewers were treated to the briefly seen view above, from the vantage point of the Expedition 22 crew. Fortunately, that same rare moment was also captured in a still image which immediately "went viral" on Internet social networks. "Shuttle Silouette: In a very unique setting over Earth's colorful horizon, the silhouette of the space shuttle Endeavour is featured in this photo by an Expedition 22 crew member on board the International Space Station, as the shuttle approached for its docking on Feb. 9 during the STS-130 mission [NASA/Image Gallery].

"We have an agreement until 2012 that Russia will be responsible for this," says Anatoly Perminov, head of the Russian space agency, about ferrying astronauts from other countries into low-Earth orbit. "But after that? Excuse me, but the prices should be absolutely different then!"

The Russians may be new at capitalism, but they know how it works. When you have a monopoly, you charge monopoly prices. Within months, Russia will have a monopoly on rides into space.

By the end of this year, there will be no shuttle, no U.S. manned space program, no way for us to get into space. We're not talking about Mars or the moon here. We're talking about low-Earth orbit, which the United States has dominated for nearly half a century and from which it is now retiring with nary a whimper.

Our absence from low-Earth orbit was meant to last a few years, the interval between the retirement of the fatally fragile space shuttle and its replacement with the Constellation program (Ares booster, Orion capsule, Altair lunar lander) to take astronauts more cheaply and safely back to space.

But the Obama 2011 budget kills Constellation. Instead, we shall have nothing. For the first time since John Glenn flew in 1962, the United States will have no access of its own for humans into space -- and no prospect of getting there in the foreseeable future.

Of course, the administration presents the abdication as a great leap forward: Launching humans will be turned over to the private sector, while NASA's efforts will be directed toward landing on Mars.

This is nonsense. It would be swell for private companies to take over launching astronauts. But they cannot do it. It's too expensive. It's too experimental. And the safety standards for getting people up and down reliably are just unreachably high.

Sure, decades from now there will be a robust private space-travel industry. But that is a long time. In the interim, space will be owned by Russia and then China. The president waxes seriously nationalist at the thought of China or India surpassing us in speculative "clean energy." Yet he is quite prepared to gratuitously give up our spectacular lead in human space exploration.

As for Mars, more nonsense. Mars is just too far away. And how do you get there without the stepping stones of Ares and Orion? If we can't afford an Ares rocket to get us into orbit and to the moon, how long will it take to develop a revolutionary new propulsion system that will take us not a quarter-million miles but 35 million miles?

To say nothing of the effects of long-term weightlessness, of long-term cosmic ray exposure, and of the intolerable risk to astronaut safety involved in any Mars trip -- six months of contingencies vs. three days for a moon trip.

Of course, the whole Mars project as substitute for the moon is simply a ruse. It's like the classic bait-and-switch for high-tech military spending: Kill the doable in the name of some distant sophisticated alternative, which either never gets developed or is simply killed later in the name of yet another, even more sophisticated alternative of the further future. A classic example is the B-1 bomber, which was canceled in the 1970s in favor of the over-the-horizon B-2 stealth bomber, which was then killed in the 1990s after a production run of only 21 (instead of 132) in the name of post-Cold War obsolescence.

Moreover, there is the question of seriousness. When John F. Kennedy pledged to go to the moon, he meant it. He had an intense personal commitment to the enterprise. He delivered speeches remembered to this day. He dedicated astronomical sums to make it happen.

At the peak of the Apollo program, NASA was consuming almost 4 percent of the federal budget, which in terms of the 2011 budget is about $150 billion. Today the manned space program will die for want of $3 billion a year -- 1/300th of last year's stimulus package with its endless make-work projects that will leave not a trace on the national consciousness.

As for President Obama's commitment to beyond-lunar space: Has he given a single speech, devoted an iota of political capital to it?

Obama's NASA budget perfectly captures the difference in spirit between Kennedy's liberalism and Obama's. Kennedy's was an expansive, bold, outward-looking summons. Obama's is a constricted, inward-looking call to retreat.

Fifty years ago, Kennedy opened the New Frontier. Obama has just shut it.

With respect to Dr. Krauthammer, with his deeply respected opinion on nearly every side of the aisle, I do not share his view (in full) that "private companies" cannot launch astronauts because it's "too expensive. It's too experimental. And the safety standards for getting people up and down reliably are just unreachably high."

That being said, I'm long on agreement with Dr. Krauthammer with regard to any deep space alternative beyond the Moon, the Achilles Heel for which is any individual astronauts cumulative risk of Radiation Exposure Induced Death (REID), and certainly exceeding NASA's safety standards of a 4 percent absolute limit over that individual's lifetime.

That issue is well-mitigated when considering even the most energetic Solar Particle Events. This is simply not the same when the discussion moves instead up spectrum to VHE cosmic flux, which, though admittedly less common, is thus far beyond current technology.

For this and many other reasons the Lunar Pioneer continue to hold to the opinion that mastery of the Moon is the key to deeper excursions into space, just as mastery of low Earth orbit is key to lunar exploration.

I am as disappointed as the next space enthusiast about the lack of U.S. manned spacecraft after the retirement of the shuttle. But it doesn't help our cause to misstate our case. Mr. Krauthammer's article tramples on the facts.

Can we really say that the US has "dominated" LEO for nearly half a century? While the US is the only country to go to the moon, I think the long term presence in LEO by Russia aboard Salyuts, MIR, and now ISS is not to be dismissed so lightly.

To say, "For the first time since 1962, the United States will have no access" to space is at best ignorant of history, and at worst disingenous. The US was previously grounded for six years, from the Apollo-Soyuz flight in 1975 to the first shuttle flight in 1981. That hiatus was very like the current situation, in that it was due to the retirement of one system before a replacement was ready.

Mr. Krauthammer's example of the B-1 bomber as a canceled weapons system seems poorly chosen, since B-1's fly daily combat missions in Afghanistan. There are a total of 66 B-1's in the fleet, and they are a success story, not a "ruse" or a "bait-and-switch".

Given that the President's 2010 budget proposal for NASA is larger than 2009, expanding science programs that have seen their previous budgets raided to support ISS, it is possible to interpret that budget as something other than a "call to retreat". But Mr. Krauthammer has an axe to grind, facts notwithstanding.