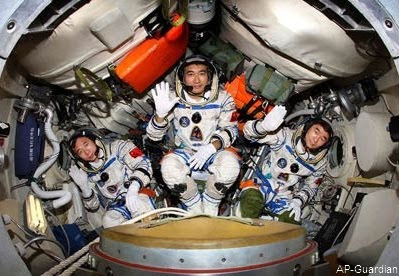 Chinese taikonauts (left to right) Jing Haipeng, Zhai Zhigang and Liu Boming wave in the cabin during a training mission in 2008 at the satellite launch centre in Jiuquan, Gansu province [AP].

The Chinese space agency could land its first astronauts on the moon within a decade in a move that would mark the beginning of a new age of lunar exploration, experts said today.

The decision by the Obama administration to scrap NASA's plans to return to the moon leave China well placed to become the second nation to land humans on the lunar surface. "The moon is an obvious target for China, and they could be there in 2020," said Ken Pounds, professor of space science at Leicester University.

The US president's budget proposal, unveiled on Monday, lacked the funds to sustain NASA's $81 billion Constellation program, spaceships and rockets designed to put humans back on the moon by 2020. But the decision to scrap NASA's plans for a permanent return has left the door open for other countries.

As always, the Guardian's opinions represent
a worldview uniquely their own.
Read the remainder of Mr. Samples, HERE.
Posted by Joel Raupe at 11:12 PM