The long shadow of the Space Shuttle 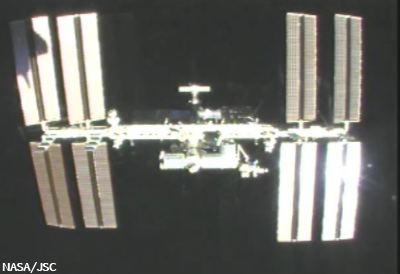 Endeavour briefly casts a moving shade over the now-virtually completed International Space Station after undocking Friday evening (UT), February 19, 2010 as both huge vehicles orbited 334.7 km above the Atlantic, west of North Africa. "Shuttle pilot Terry Virts performed a fly-around of the station, enabling his crewmates to conduct a photo survey of the complex." The long shadow over the huge ISS solar arrays seem to symbolizes both the long end and the nearly as long beginning of two historic moments of "The Space Age." After more than a decade of assembly the Shuttle finally has a true destination in low Earth orbit, as the thirty-year-old manned reusable heavy-lift vehicle program draws to an end. In the long run, perhaps the most notable accomplishment for the Shuttle, the United States and for all of "humankind" will have been having proved large-scale construction off-Earth is possible, a sheer existential fact that everywhere humans live on Earth, in every state of civilization, they can see (now often even in daylight) in the sky overhead. The first Space Age, then, may now be said to have arrived at its end. How our humans will learn to survive beyond low Earth orbit is the next real challenge.
Posted by Joel Raupe at 3:50 AM