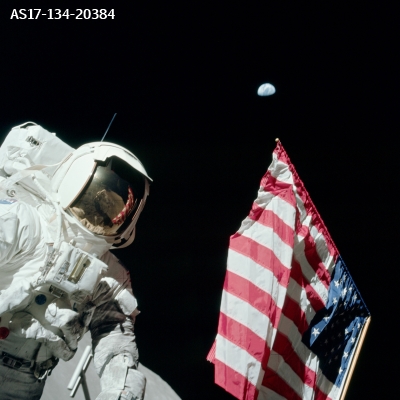 The only professional scientist ever to work on the Moon, Dr. Harrison H. "Jack" Schmitt was photographed by Captain Eugene Cernan within minutes after beginning their first EVA of Apollo 17, the last manned mission to the lunar surface, very early on the morning of December 12, 1972 [High Resolution/Apollo 17 Surface Journal].

The Administration finally has announced its formal retreat on American Space Policy after a year of morale destroying clouds of uncertainty. The lengthy delay, the abandonment of human exploration, and the wimpy, un-American thrust of the proposed budget indicates that the Administration does not understand, or want to acknowledge, the essential role space plays in the future of the United States and liberty. This continuation of other apologies and retreats in the global arena would cede the Moon to China, the American Space Station to Russia, and assign liberty to the ages.

The repeated hypocrisy of this President continues to astound. His campaign promises endorsed what he now proposes to cancel. His July celebration of the 40th Anniversary of the first Moon landing now turns out to be just a photo op with the Apollo 11 crew. With one wave of a budget wand, the Congress, the NASA family, and the American people are asked to throw their sacrifices and achievements in space on the ash heap of history.

Expenditures of taxpayer provided funds on space related activities find constitutional justification in Article I, Section 8, Clause 8, that gives Congress broad power to ˛promote the Progress of Science and the useful Arts.˛ In addition, the Article I power and obligation to łprovide for the Common Defence˛ relates directly to the geopolitical importance of space exploration at this frontier of human endeavor. A space program not only builds wealth, economic vitality, and educational momentum through technology and discovery, but it also sets the modern geopolitical tone for the United States to engage friends and adversaries in the world. For example, in the 1980s, the dangerous leadership of the former Soviet Union believed America would be successful in creating a missile defense system because we succeeded in landing on the Moon and they had not. Dominance in space was one of the major factors leading to the end of the Cold War.

With a new Cold War looming before us, involving the global ambitions and geopolitical challenge of the national socialist regime in China, President George W. Bush put America back on a course to maintain space dominance. What became the Constellation Program comprised his January 14, 2004 vision of returning Americans and their partners to deep space by putting astronauts back on the Moon, going on to Mars, and ultimately venturing beyond. Unfortunately, like all Administrations since Eisenhower and Kennedy, the Bush Administration lost perspective about space. Inadequate budget proposals and lack of Congressional leadership and funding during Constellation's formative years undercut Administrator Michael Griffin's effort to implement the Program after 2004. Delays due to this under-funding have rippled through national space capabilities until we must retire the Space Shuttle without replacement access to space. Now, we must pay at least $50 million per seat for the Russians to ferry Americans and others to the International Space Station. How the mighty have fallen.

Not only did Constellation never received the Administration's promised funding, but the Bush Administration and Congress required NASA 1) to continue the construction of the International Space Station (badly under-budgeted by former NASA Administrator O'Keefe, the OMB, and ultimately by the Congress), 2) to accommodate numerous major over-runs in the science programs (largely protected from major revision or cancellation by narrow Congressional interests), 3) to manage the Agency without hire and fire authority (particularly devastating to the essential hiring of young engineers), and 4) to assimilate, through added delays, the redirection and inflation-related costs of several Continuing Resolutions. Instead of fixing this situation, the current Administration let go Administrator Griffin, the best engineering Administrator in NASA's history, and now has cancelled Constellation. As a consequence, long-term access of American astronauts to space rests on the untested success of a plan for the łcommercial˛ space launch sector to meet the increasingly risk adverse demands of space flight.

Histories of nations tell us that an aggressive program to return Americans permanently to deep space must form an essential component of national policy. Americans would find it unacceptable, as well as devastating to liberty, if we abandon leadership in space to the Chinese, Europe, or any other nation or group of nations. Potentially equally devastating to billions of people would be loss of freedom's access to the energy resources of the Moon as fossil fuels diminish and populations and demand increase.

In that harsh light of history, it is frightening to contemplate the long-term, totally adverse consequences to the standing of the United States in modern civilization if the current Administration's decision to abandon deep space holds. Even a commitment to maintain the International Space Station using commercial launch assets constitutes a dead-end for Americans in space. At some point, now set at the end of this decade, the $150 billion Station becomes a dead-end and would be abandoned to the Russians or just destroyed, ending America's human space activities entirely.

What, then, should be the focus of national space policy in order to maintain leadership in deep space? Some propose that we concentrate only on Mars. Without the experience of returning to the Moon, however, we will not have the engineering, operational, or physiological insight for many decades to either fly to Mars or land there. Others suggest going to an asteroid. As important as diversion of an asteroid from collision with the Earth someday may be, just going there hardly stimulates łScience and the useful Arts˛ anything like a permanent American settlement on the Moon! Other means exist, robots and meteorites, for example, to obtain most or all of the scientific value from a human mission to an asteroid. In any event, returning to the Moon inherently creates capabilities for reaching asteroids to study or divert them, as the case may be.

Returning to the Moon and to deep space constitutes the right and continuing space policy choice for the Congress of the United States. It compares in significance to Jefferson's dispatch of Lewis and Clark to explore the Louisiana Purchase. The lasting significance to American growth and survival of Jefferson's decision cannot be questioned. Human exploration of space embodies the same basic instincts as the exploration of the West ­ the exercise of freedom, betterment of one's conditions, and curiosity about nature. Such instincts lie at the very core of America's unique and special society of immigrants.

Over the last 150,000 years or more, human exploration of Earth has yielded new homes, livelihoods, know how, and resources as well as improved standards of living and increased family security. Government has directly and indirectly played a role in encouraging exploration efforts. Private groups and individuals take additional initiatives to explore newly discovered or newly accessible lands and seas. Based on their specific historical experience, Americans can expect benefits comparable to those sought and won in the past also will flow from their return to the Moon, future exploration of Mars, and the long reach beyond. To realize such benefits, however, Americans must continue as the leader of human activities in space. No one else will hand them to us. Other than buying our national debt, China does not believe in welfare for the U.S.

With a permanent resumption of the exploration of deep space, one thing is certain: our efforts will be as significant as those of our ancestors as they migrated out of Africa and into a global habitat. Further, a permanent human presence away from Earth provides another opportunity for the expansion of free institutions, with all their attendant rewards, as humans face new situations and new individual and societal challenges.

Returning to the Moon first and as soon as possible meets the requirements for an American space policy that maintains deep space leadership, as well as providing major new scientific returns. Properly conceived and implemented, returning to the Moon prepares the way to go to and land on Mars. This also can provide a policy in which freedom-loving peoples throughout the world can participate as active partners.

The Congressionally approved Constellation Program, properly funded, contains most of the technical elements necessary to implement a policy of deep space leadership, particularly because it includes development of a heavy lift launch vehicle, the Ares V. In addition, Constellation includes a large upper stage for transfer to the Moon and other destinations, two well conceived spacecraft for transport and landing of crews on the lunar surface, strong concepts for exploration and lunar surface systems, and enthusiastic engineers and managers to make it happen if adequately supported. The one major missing component of a coherent and sustaining deep space systems architecture may be a well-developed concept for in-space refueling of spacecraft and upper rockets stages. The experience base for developing in-space refueling capabilities clearly exists.

Again, if we abandon leadership in deep space to any other nation or group of nations, particularly a non-democratic regime, the ability for the United States and its allies to protect themselves and liberty will be at great risk and potentially impossible. To others would accrue the benefits ­ psychological, political, economic, and scientific ­ that the United States harvested as a consequence of Apollo's success 40 years ago. This lesson has not been lost on our ideological and economic competitors.

American leadership absent from space? Is this the future we wish for our progeny? I think not. Again, the 2010 elections offer the way to get back on the right track.
Posted by Joel Raupe at 11:30 PM

Dude, Godwin's Law is suppose to apply to discussions about something devolving, *not* start off with it. ;)

Still, some good points but missing what is shaping up to be Phase II of what's going on with the plan.