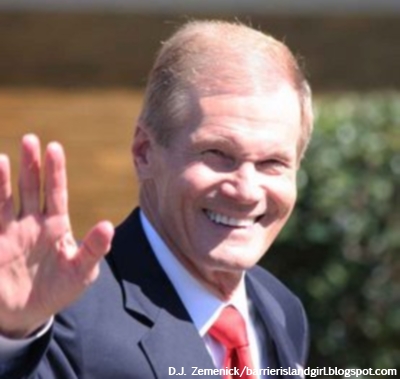 Nelson, who chairs the Senate space and science subcommittee, has scheduled a hearing next week to press NASA officials on their plans for human exploration of space.

(Twenty-seven) members of Congress, many from Alabama and Texas, which have NASA centers, last week sent a letter to NASA chief Charles Bolden, insisting that he take no action that could harm the Constellation moon program. Republican U.S. Rep. Bill Posey of Rockledge and Democrat Suzanne Kosmas of New Smyrna Beach signed the letter. Posey and Kosmas represent Kennedy Space Center, where 7,000 workers will become jobless when the shuttle stops flying next year.

Nelson said Congress will help form the goals of the space program, which he insisted will include the development of a heavy-lift vehicle eventually bound for Mars.

"The White House has given the perception that the manned space program has been killed, when, in fact it hasn't," said Nelson, who has been a regular lobbyist in the White House for a strong space program. "And I can tell you that we're not going to let it die. That's not the president's intention."