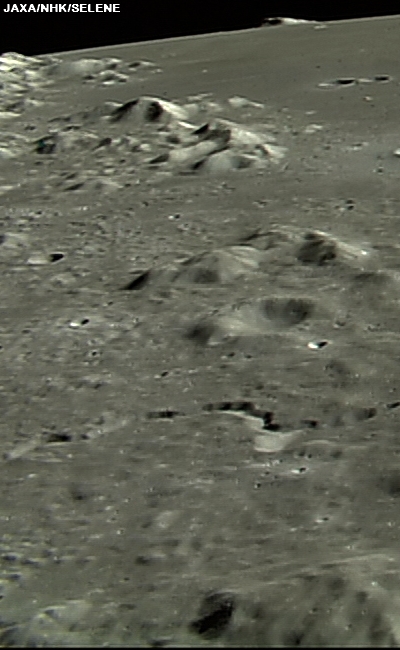 Another, far closer look at Kaguya HDTV-006-2, this time centered on the Constellation Region of Interest east of Plato. More precisely, Kaguya was traveling south over the northern Near Side. It is, therefore, "upside down" when related to the context maps and LROC wide and narrow angle camera images immediately below. A hint how to find the area of interest would be to find the prominent bend in the rille three-quarters of the way down, below the middle of the Kaguya image. The Constellation region of interest is at the center, half way between the rille bend and the bottom of the image, east (to the left) of the two craters on a five o'clock line from the bend. The Kaguya still covers the full resolution LROC NAC strip referenced at the end of the story below [HDTV-006-2l JAXA/NHK/SELENE]. 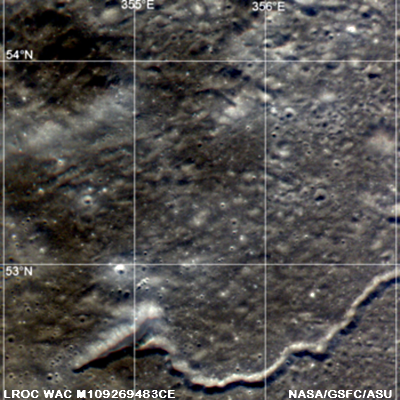 When the featured image of the Constellation Region of Interest east of Plato was released by the LROC team at Arizona State University yesterday (See Below), the photomap image immediately above refused to "render." Not too many hours later the image finally became accessible, hinting at what may eventually be revealed as a new global LRO wide-angle camera color image of the entire Moon. The region of interest northwest of Plato crater exhibits a wide variety of geologic features. LROC WAC frame M109269483CE; 695 nm in red, 567 nm in green, 415 nm in blue [NASA/GSFC/Arizona State University].
Posted by Joel Raupe at 2:33 PM