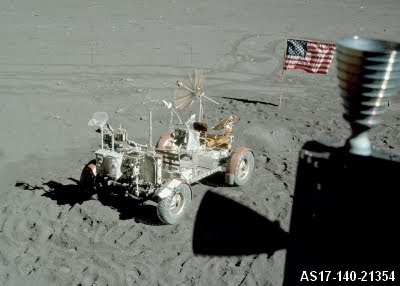 Long-Term Parking - Apollo 17 lunar rover before the beginning of the last EVA on the Moon, December 1972. Delays and politicization would delay the first Space Shuttle flight from 1976 until 1981.
We must not discard greatest innovator in history
U.S. will lose its hard-earned technology edge

Except in wartime, there has never been another government program that produced as much technological innovation as the U.S. space program, and there likely never will be. No other program has so successfully infused the economy, rallied the nation, inspired youngsters toward academic achievement or established the U.S. as the world leader in technology.

In spite of this, on Feb. 1, President Barack Obama announced the cancellation of the Constellation program of exploration, leaving NASA, for the first time in history, without a specific mission. It is as if President Gerald Ford had canceled the space shuttle program in 1975, just as the last Apollo mission was being flown. The shuttle orbiter development was well under way at the time, but that did not save us from a six-year gap before the next American was launched into space.

Today there is no realistic successor for human spaceflight waiting in the wings.

The biggest consequence of that first gap was the best and brightest of the NASA engineers and scientists leaving to seek more challenging jobs. It took years to rebuild the professional team that would eventually launch 134 shuttle missions and construct the most amazing engineering project in history — the International Space Station.

The space shuttle program not only maintained our preeminence in space, it raised our technical expertise and further increased our prestige among the developed nations of the world — precisely the same reasons the Chinese are now working toward landing a man on the moon.

Congress is our last hope of putting a stop to the dismantling of a once great agency. Members of Congress are concerned about job losses and the economic impact, but in the long run they are not nearly as costly as the loss of an inspirational vision for the next generation of space scientists, engineers and explorers. You have only to look at Lewis and Clark, our westward expansion and Armstrong and Aldrin landing on the moon to know exploration is in our blood. We should be proud of it. Americans need a frontier.

While NASA and some others are trying to put the best positive spin on the budget proposal, the negative fallout is building. Personnel requirements for the agency's new direction will do little to mitigate the tremendous losses from this foolish cancellation without a replacement in hand. The real loss, as in the 1970s, will be those trained and experienced engineers who are already leaving for more inspiring pursuits.

Spokesmen are trying to rationalize the debilitating cuts in the agency's programs. They claim the “$6 billion increase over the next five years demonstrates President Obama's strong commitment to space exploration.” That is just over 1 percent a year, and $2.5 billion of it is committed to the shutdown of Constellation, the same amount proposed for research on how global warming is affecting the Earth.

The $19 billion for 2011 is less than 0.5 percent of the proposed federal budget, one-ninth of what it was at its peak in the 1960s. The $300 million increase eliminates the program of human space exploration and sentences the agency to the same starvation diet it has existed on for the past several decades. NASA needs a $3 billion increase to continue operating a viable human space program.

NASA spin is touting “new technology development programs to expand the capabilities of future explorers”— in-orbit fuel depots, rendezvous and docking, closed-loop life support systems, heavy-lift research and development of new engines, propellants, materials and combustion processes. These may sound new to someone unfamiliar with what NASA has been doing for 50 years, but (with one exception) they are pursuits for which NASA already has an unmatched reputation. Each of these would have played an essential role in the now canceled Constellation program. Without the focus of a specific mission, the raison d'être for these technologies is now “to advance the field of space science.”

In the place of the canceled Ares and Orion hardware, we now have increased support for education, increased spending on the discredited global warming hypocrisy and subsidies to several new commercial rocket companies. And, oh yes, don't forget a new outreach program to Muslim countries without established space programs.

In canceling Constellation with nothing to take its place, the president is saying the U.S. should not have its own human space program and is directing funds to the Commercial Orbital Transportation Services program, or COTS. If NASA wants to participate in human spaceflight, it will have to be through contractors.
Market realities

NASA has always contracted for most of its hardware and service needs. Some of the contractors were successful in private industry, and sometimes the government was the sole customer. A company dependent solely on government grants, contracts and guarantees is not a free-market, private enterprise.

To succeed in the private sector a company must raise capital, develop a product, sell it at a profit and show a return on investment commensurate with the risk within a reasonable time frame. Unfortunately, space will not be an attractive commercial opportunity for the foreseeable future. Space exploration is a costly precursor to uncovering commercial opportunities, and it will be decades before a private investor can expect a return commensurate with the risk of exploration.

Until we find a way to make a profit in space, governments and countries are the only institutions able to afford space exploration and live with the extremely long-term returns. That is why NASA must continue to develop the next-generation human space system, whatever form that system may take. Human space systems cannot be evaluated solely on the basis of scientific return per dollar spent. Dominance in space gives our country credibility or leverage in so many other forms than economic gains; scientific discovery, understanding of the universe, international prestige, military stature and being seen as a country that can do anything we set our minds to.
Limited effect

The COTS program — companies selling services to NASA — made some sense with NASA still in the exploration business, doing the applied research and expanding the envelope of space travel beyond the moon. It would be very difficult for private companies to replicate the singular competence NASA has developed. Even if COTS-created vehicles are successful, they will be woefully inadequate for near-term needs and will do nothing for exploration.

Only government programs — regardless of country — will get humans to the moon and beyond. Space exploration is an activity from which monetary profits cannot be generated, leaving contractors supplying government programs that do not have to show a profit. After 50 years in space, how many lunar or interplanetary space probes have been launched by commercial space companies?

We have been told by the agency that future exploration programs, such as returning to the moon or going to Mars, will be a global effort, not an American one. That may sound appealing with respect to sharing costs and other resources, but it virtually guarantees those programs will take longer, cost more and render them vulnerable to political bickering — like the International Space Station. As a result of the political decision to make the Russians a full partner, the ISS has cost the U.S. $10 billion more, was two years late and required that the station be placed in an orbit unacceptable for most alternative uses.
Degeneration?

Have we really degenerated as a country to the point where we can no longer fund our own exploration? Did we spend $460 billion becoming pre-eminent in space, only to stupidly surrender it? What does our new dependence on other countries to send Americans into space say about our culture, society and prospects for the future?

NASA was always considered in a class by itself. Now, when the world is becoming increasingly dependent on space-based systems, we seem bent on slipping back into mediocrity. How do you rationalize surrendering our pre-eminence in space? The last time a country voluntarily gave up its pre-eminent position in exploration was when the Ming government recalled the Chinese fleets in 1433. That critical error condemned China to worldwide stagnation for centuries.

NASA has always been a mission-driven agency that attracted a particular kind of individual. It focused on the objective, determined the obstacles, solved the problems and, in the end, accomplished the impossible. We all benefit from the technological fallout to our economy and our growing stature in the world. Continuing NASA's program of exploration requires three things: the technology, the resources and the will to do it. We have plenty of the first two, but have we lost the will?

Cunningham piloted the first manned Apollo mission in 1968 and is author of The All-American Boys.
Posted by Joel Raupe at 7:36 PM