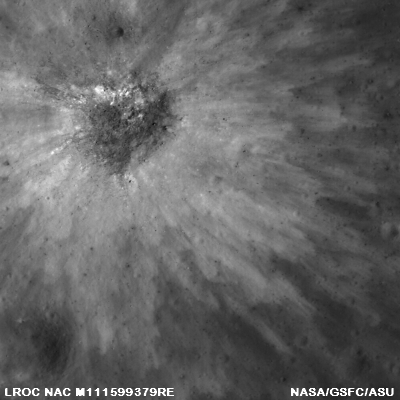 Overlapping petals of bright ejecta illustrate the complexity of ejecta emplacement, even in smaller impact events. The source crater is ~120 meters in diameter and lies on the floor of Murchison Crater, one of the Constellation regions of interest. Image size is 500-meter x 500-meter from LROC NAC frame M111599349RE; north is up [NASA/GSFC/Arizona State University].
Zibi Turtle
LROC News System

A complex ejecta blanket is still preserved around this unnamed young crater, ~120 meter in diameter at 4.757° N, 359.5° E. Numerous discrete fingers of bright material ejected from the crater can be seen overlapping one another. A rough approximation of the crater depth based on its diameter suggests that the bright material was excavated from within tens of meters beneath the original surface.

Just north of the rim, a much smaller, younger crater is superimposed on the bright ejecta. That this crater and its ejecta appear to be dark against the underlying bright ejecta blanket shows that it excavated darker material. Based on this crater's size (~14 m diameter), material ejected during its formation would have come from only a few meters deep. It appears that the original surface had a thin dark layer of material overlying a brighter subsurface. This contrast is an excellent example of how scientists use impacts craters, of all sizes, to probe the subsurface.

The light and dark patterns in the ejecta are revealed quite clearly because the Sun was high when this image was taken: the incidence, i.e. the angle between the Sun and the zenith (straight overhead), was 29°. Such illumination highlights variations in surface brightness; for the same reason, topographic shading is more muted. 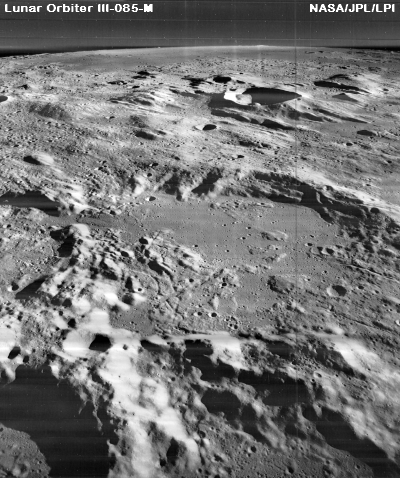 Oblique view to the northeast across 57 km diameter Murchison crater (center) from Lunar Orbiter III. Mare Imbrium lies ~350 km to the northwest (out of the image to the left). [NASA/LPI]
Murchison Crater predates the massive impact that created the Imbrium Basin, and was eroded by debris from that event. An oblique image of Murchison taken by Lunar Orbiter III illustrates how this area was sculpted by material thrown out during the impact: Imbrium lies far (>350 km) to the northwest of Murchison and its ejecta streamed from left to right across the terrain seen here creating linear features, which are especially apparent in the distance.

Murchison has been identified as a region of interest to the Constellation Program because of the proximity of highlands regolith and the ponding of impact melt ejected during the creation of the Imbrium Basin. Several important questions could be investigated by future explorers to this site. Sampling the Imbrium impact melt would allow absolute age dating of this critical event, the exposed highlands in the crater walls and floor samples several km of the ancient lunar crust, and the dark light contrast exposed in the NAC image suggests a local event. Perhaps the thin dark layer is the remnant of explosive volcanism?

Explore the Murchison region of interest for yourself! 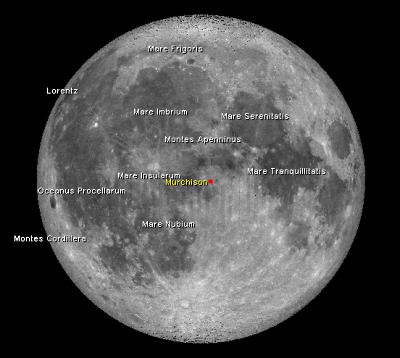