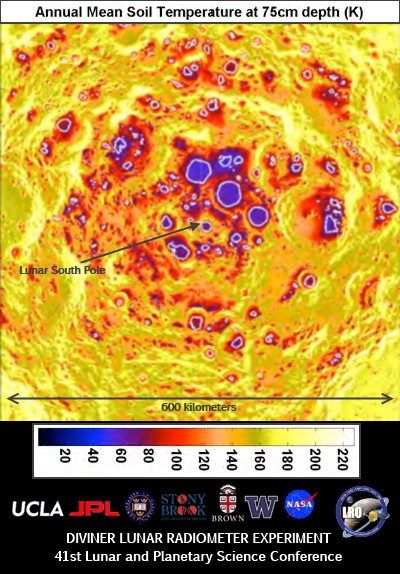 Introduction: The Diviner Lunar Radiometer Experiment aboard the Lunar Reconnaissance Orbiter has been mapping the moon nearly continuously since July 2009. The instrument has acquired thermal emission and solar reflectance data in nine spectral channels spanning a wavelength range from 0.3 to 400 microns, at spatial resolutions ranging from 0.2 to 1.3 km [1]. Diviner’s growing dataset is revealing the extreme nature of the lunar thermal environment and its diurnal and seasonal variability, as well as aspects of the moon’s composition and the nature of the lunar polar cold traps.

Polar Regions: The moon’s polar regions are of special interest due to the presence of permanently shadowed regions that may contain cold-trapped water and other volatiles. Diviner has obtained sufficient coverage to make complete maps of annual maximum temperatures in the south polar region, and annual minimum temperatures in the north polar region. The results reveal the presence of large areas on the surface and beneath the surface that are capable of serving as long-term cold traps for water ice, as well as com-pounds of lower and higher volatility. Diviner observations were used to select the LCROSS impact site, and Diviner observed the LCROSS Centaur impact region 90 seconds after impact and then on subsequent orbits [2]. The thermal signature of the LCROSS impact crater and impact plume are clearly evident in the Diviner data, and they have been analyzed to constrain the temperatures and thermal properties of the impact site [2].

Low and Mid-Latitude Regions: In the low and mid-latitude regions, Diviner has mapped daytime and nighttime thermal emission in multiple spectral channels. Daytime measurements in Diviner’s three 8-micron channels have been used to map the wave-length of a distinct peak in the Moon’s thermal emission spectrum due to the Christiansen feature, an emissivity maximum associated with Si-O stretching vibrations [3]. The results show strong correlations with lunar mineralogy derived from other remote sensing techniques and analysis of lunar samples [4-11]. Of particular significance are the presence of regions of highly silicic composition associated with non-mare volcanism [10]. Diviner has also acquired nighttime measurements in four thermal mapping channels. These data are being used to map the global distribution of isolated exposures of high thermal inertia mate-rial associated with exposed impact melt, the recent excavation of blocky material by impact craters [12-14].

Coverage: Diviner has now acquired observations over a complete diurnal cycle. Diviner daytime and nighttime observations each cover approximately 40% of the surface area of the moon. Over time, it is anticipated that sufficient coverage will be accumulated to map most locations on the moon at multiple times per day.

Data Availability: Calibrated Diviner data obtained during the two-month LRO Commissioning Orbit plus the first three months of the LRO Mapping Orbit are scheduled to be available to the general community through the Planetary Data System on March 15, 2010. Analyzes of Diviner temperature, thermophysical properties and compositional observations in conjunction with other lunar datasets will provide valuable new insights into the structure and history of the lunar regolith, and the nature and distribution of cold-trapped volatile compounds at the lunar poles.

Pre-Conference Symposium, February 28
Posted by Joel Raupe at 3:11 AM