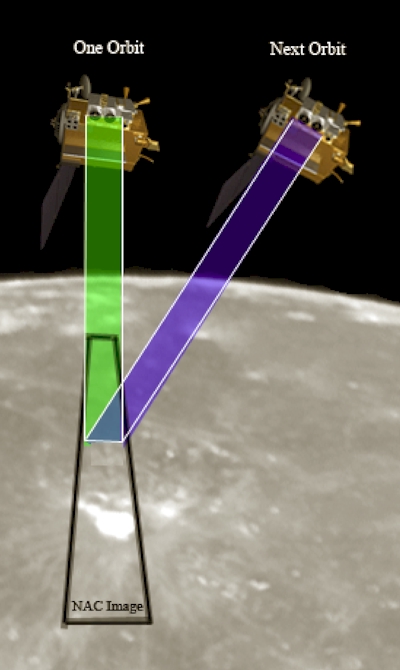 One of the many fun tasks I get to do is to produce Digital Elevation Models (DEM) of the lunar surface by using specialized hardware and software to extract elevation data on the moon from stereo images. A DEM is like a digital version of an old-fashioned contour map and essentially provides the elevation of the surface for each pixel. For a pair of images to be stereo, it must show the same location on the moon taken with different illuminaion conditions. Or, to put it another way, the relative angles of the Sun, the lunar surface, and the spacecraft have to be different for each picture while showing the same region.

Aboard LRO are two narrow-angle cameras (NACs). Both of the NAC cameras are fixed to the spacecraft, so they can't be moved independently. The only way for LROC to get a geometric stereo pair is to first collect an image looking straight down, and then on the next orbit, have the spacecraft tilt slightly so that the cameras point toward the same location imaged on the previous orbit. This gives us a geometric stereo pair, which consists of one image looking straight down and the other image looking from an angle. The diagram below demonstrates this technique. The off-nadir rolls interfere with the data collection of the other instruments, so LRO’s opportunities to do rolls like this are limited to only a handful of rolls per week, and the number of geometric stereo images collected by LROC will be limited.

Read the Journal posting HERE.
Posted by Joel Raupe at 12:18 AM

I would like to produce physical 3D models of the lunar surface, initally using stereo lithography, and eventually using CNC router. Where can I get accurate DEM of the moon? The only published information either has heights accurate to a kilometer, or extreme closeups where the height info is a few meters.

Howard, thanks for your comment. It was good to hear from you. While I don't have the link handy, I believe you can find the DEM's you are looking for fairly easily. There are two excellent DEM's available now, and on the web. The Planetary Data System (PDS) and the Astrogeology Section of the U.S. Geological Service maintain the global data returned from the NASA/DOD mission Clementine in 1994 and the Japanese Space Agency (JAXA) just this past week published the far more comprehensive and accurate model produced from data returned by the Kaguya orbiter in 2007-2008. The third model is being constructed from the LAT experiment on-board the Lunar Reconnaissance Orbiter, of course, which should be available early next year. The Clementine data and a significant part of the data from Kaguya has been weaved into the lunar globe within the Google Earth application, in versions above v. 3. Hope this is helpful. Don't hesitate to let me know if you need further information, or if you discover I've made an error, working only from memory.

Sir m really glad to come across your article when i was looking for a way to get DEM online. am planning to do my project in this area as on creating dem for lunar surface . but i don't know where i could find these dems online..please help me out with ths