From life in the fields to life in Space 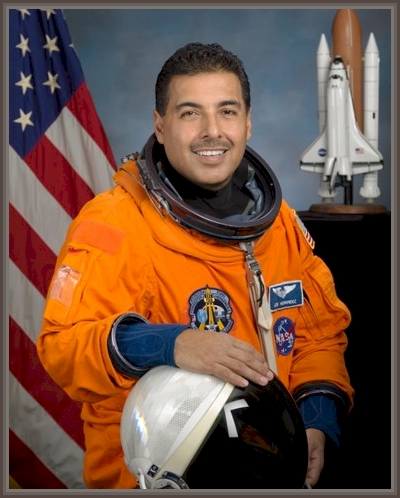 Forty-year-old Jose Hernandez, mission specialist on STS-128 Discovery, still targeted for launch August 24, at 05:50 UT (1:58 AM EDT). Because interception with the International Space Station required insertion into an orbit inclined 58 degrees from the equator, boost phase for this night launch should be easily visible up the Atlantic Seaboard of North America, as far north as New England.

Later this month, when Jose Hernandez joins the ranks of the dozen or so Hispanic astronauts -- and the handful of Mexican-Hispanics -- who have ventured into space, the gravity-defying thrust of the rockets will serve as a symbol of his life's journey.

Hernandez's quest to visit space began with his feet planted firmly in the earth, hoeing sugar beats in the fields as a child. Back then, Hernandez -- who didn't learn English until age 12 -- traveled with his migrant-farm family from Mexico to Southern California and back.

On Aug. 25, the 47-year-old engineer's dream is scheduled to culminate with the launch of Space Shuttle Discovery.

The seven-member Discovery crew will include another Hispanic, Danny Olivas, a graduate of the University of Texas at El Paso. It will be the first NASA shuttle crew to include two Hispanic astronauts, according to the San Antonio Express.

Hernandez has already launched a Twitter account -- NASA's first bilingual Twitter feed -- to keep followers apprised of his day-to-day activities before the big event. He will continue the tweets in space.

The short passages range from the technical to the mundane.

"Had our L-10 physical, talked to the crew on board station and redlined our procedures. Now sleep shifting," he wrote on Wednesday, just minutes after posting this tweet: "Watching the Mexico vs USA soccer game. Awesome game!"

To get to where he is, Hernandez overcame long odds.