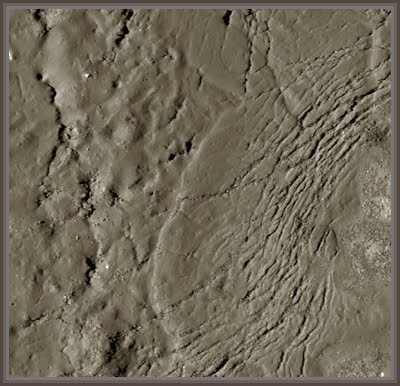 "The bright rays of the crater and lack of superimposed impacts is evidence that Necho is a young, fresh crater. Similar to other young impact craters the floor is flooded with massive amounts impact melt. Impact melt is instant lava, lunar rock melted in an instant as the tremendous energy of impact is released.The melt pools in the bottom of the crater,perches on terraces and flows down the flanks. Often times distinct flows can be found that look just like lava flows found on Earth. This portion of the NAC frame (above) shows cracks, 10 to 15 m wide, within the impact melt on the crater floor which formed as the melt cooled and the crater floor was readjusting. Scroll around in the whole image and see how many impact melt features you can find.
LROC NAC Image M103703826LE: Uncalibrated data; north is up
Explore a full Apollo metric frame (AS17-M-1142) of Necho Crater.
Read a research article by Gifford et al. (1979) on the geology of Necho Crater.
Posted by Joel Raupe at 1:37 AM