Bio-ISRU: living off the lunar land 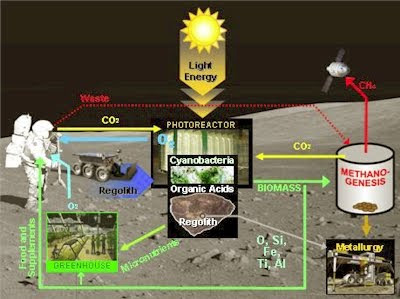 Concept of a bio-tech cycle for extraction of rocket fuel, oxygen and food production at a lunar outpost. David McCay, the principal author of the presentation in Korea cited below also co-authored the work cited above. (The Development and Perspectives of Bio-ISRU, Brown, et.al., LEAG-ICEUM-SRR (2008) #4048)

NASA Scientists at Johnson Space Center, working on ways to live off the land on the Moon, are going beyond using solar or nuclear power alone to produce air, food and rocket fuel from lunar materials. They are suggesting importing litholytic cyanobacteria to the Moon, to be grown in a closed system and used together with biotechnology to accomplish in situ resource utilization, (ISRU).

"Litholytic" literally means "rock-eating," micro-organisms that would free oxygen, hydrogen and recycle carbon, among other things, as a metabolic biproduct. Highly-reactive oxygen, of course, is what animates animal life on Earth, and it exist here primarily because it is a waste product of plant life.

Cyanobacteria are among the most primitive life forms, deriving energy from photosynthesis, directly from sunlight. They are adapted as both simple plant and animals (and perhaps in-between) to nearly every environment on Earth; deep underground, under crushing ocean depths, in the driest deserts and even twenty kilometers overhead in the stratosphere.

Dr. David McCay of Johnson Space Center, with many colleagues, has focused on ISRU from the beginning, when national policy set upon returning to the Moon to stay. Learning to live off the land there is among the most critical of technological elements in need of development before extended human activity on the Moon. Every ounce of material produced on site, to put it bluntly, is hundreds of thousands of dollars less in material that needs to be lofted out of Earth's relatively strong "Gravity Well."

In October 2008, McCay co-authored a presentation on the concept of "Bio-ISRU" at a Joint Meeting of the Lunar Exploration Analysis Group (LEAG), the International Conference on Exploration and Utilization of the Moon (ICEUM) and the Space Resources Roundtable (SRR).

In October, McCay, together with Igor Broun of Jacobs Technology's Sverdrup Group, will make a similar presentation to the 60th International Astronautical Congress in Daejeon.

BIO-ISRU: A New Approach for Producing Oxygen
and Recycling Carbon on the Moon
In-situ production of consumables (mainly oxygen) using local resources (In-Situ Resource Utilization-ISRU) will significantly facilitate current plans for human exploration and settlement of the solar system, starting with the Moon.

With few exceptions, nearly all technology development to date has employed an approach based on inorganic chemistry. None of these technologies include concepts for integrating the ISRU system with a bioregenerative life support system and a food production system. It is known however that bacteria are able to dissolve different rocks, including lunar regolith simulants.

As the regolith minerals and glasses dissolve, their bound oxygen and implanted carbon and hydrogen become available for utilization at a lunar outpost. The cyanobacteria can extract many needed elements directly from the dissolved regolith.

Our concept for the development of a biotechnological loop for in-situ resources extraction, propellant and food production at the lunar outpost is based on the cultivation of litholytic cyanobacteria with lunar regolith in a geobioreactor.

Sunlight provides most of the energy needed for growth of the bacteria colony within the geobioreactor. As a result of pilot studies, we are developing a concept for a semi-closed integrated system that uses a bioreactor containing cyanobacteria for extracting useful elements from the regolith. This bioreactor can revitalize air by utilization of excess CO2 and production of O2.

Some components of cyanobacterial biomass can be used directly as nutritional supplements.

Such a synthesis of technological capability could decrease the demand for energy, uplift mass and overall cost of future exploration.
Posted by Joel Raupe at 5:44 PM

This entire post absolutely ROCKS! Thank you for all the hard work you put into it. It really shows.
panini press