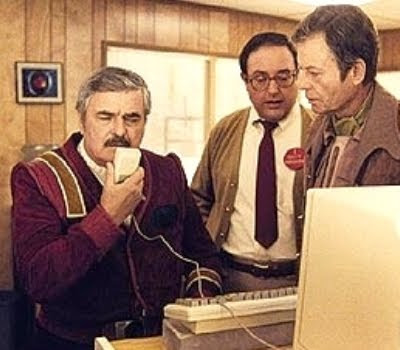 "Hello, Computer." - Lt. Comdr. Montgomery "Scotty" Scott (James Doohan), UFP Starfleet, fails in an attempt to voice-operate a late-20th century Turing machine, mistaking the cursor-pointer "mouse" for a hand-held microphone. "Scotty" is about to divulge the molecular model of transparent aluminum after the stunned local materials manufacturer (Alex Henteloff-center) offering to trade the information in return for services. The deal will make him "wealthy beyond the dreams of avarice," according to "Scotty's fellow AWOL Starfleet officer Dr. Leonard McCoy (DeForest Kelley). This clear violation of Time Protocol will enable timely construction of a saltwater aquarium on-board a Klingon battle cruiser, parked and cloaked in nearby San Francisco; for the purposes of transporting a mating pair of humpback whales to the 23rd century. ("Star Trek IV: The Voyage Home," Paramount Pictures, 1986.)
A New State of Matter

Oxford scientists have created a transparent form of aluminium by bombarding the metal with the world’s most powerful soft X-ray laser. ‘Transparent aluminium’ previously only existed in science fiction, featuring in the movie Star Trek IV, but the real material is an exotic new state of matter with implications for planetary science and nuclear fusion.

In this week’s Nature Physics an international team, led by Oxford University scientists, report that a short pulse from the FLASH laser ‘knocked out’ a core electron from every aluminium atom in a sample without disrupting the metal’s crystalline structure. This turned the aluminium nearly invisible to extreme ultraviolet radiation.

'What we have created is a completely new state of matter nobody has seen before,’ said Professor Justin Wark of Oxford University’s Department of Physics, one of the authors of the paper. ‘Transparent aluminium is just the start.