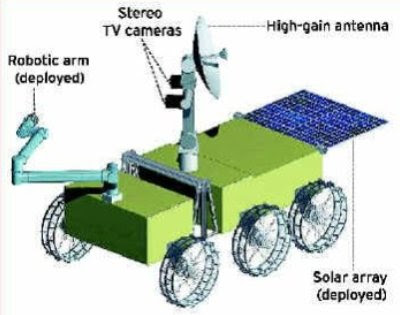 Chandrayaan II - From an early concept (ISRO) - The Russian Space Agency Roscosmos and the Indian Space Research Organisation reportedly collaborated on design work for India's first lunar soft-lander. The last vehicle to safely land on the lunar surface was Luna 24, which retrieved 170 gm of regolith from the western Mare Crisium in August 1976.
Kerala Latest News - Bangalore - India has completed the design of Chandrayaan-2, its next mission to the moon - in collaboration with Russia; a Lander and rover which can collect and analyze samples of the lunar regolith.

“Right now, the design has been completed. We had a joint review with Russian scientists here,” G Madhavan Nair told reporters. Dr. Nair is chair of the Indian Space Research Organization.

Based in Bangalore, ISRO reports Chandrayaan-2 will consist of an orbital vehicle, lunar lander and rover. The target for the lander-rover will be determined by flight dynamics and data returned from Chandrayaan-1, now parked in a 200 km orbit, launched from Sriharikota October 22, 2008.

While ISRO develops an orbiter, Roscosmos will build the Chandrayaan lander and rover. ISRO says additional science payloads from international scientific community will be hosted by the mission

“Next, now that design has been completed, we will go towards prototype building, which will be taken up next year,” Nair said.
Posted by Joel Raupe at 5:50 PM

i am very very happy that we indians are doing good in space research ...all the best ....

i am very very happy that we indians are doing good in space research ...all the best