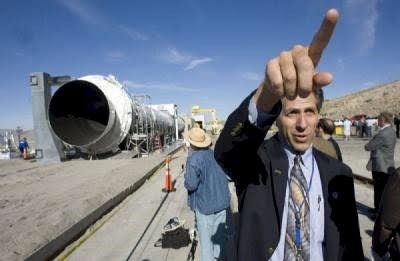 Promontory - Standing near the 12-foot-diameter nozzle of a giant booster motor, NASA's Alex Priskos conceded he was feeling a few butterflies as he waited for the motor to be test-fired early Thursday afternoon.

Utah's Alliant Techsystems, which is developing the motor for the first stage of NASA's Ares 1 rocket, is scheduled to test fire its first developmental motor at 1 p.m.

"I'm always excited and always feel a few butterflies when a motor is tested," Priskos said. "But this motor is going to work well. We've learned a lot using similar motors to launch the space shuttle."

Although strikingly similar to the four-segment booster motors that for years have been used to propel the space shuttle into orbit, the new booster was built with an additional segment to provide more thrust -- and to allow more weight to be lifted into orbit.

Priskos said the Ares 1 rocket will be much safer for astronauts than the space shuttle it will replace. The Ares 1 is scheduled for its maiden flight in 2015.

Former astronaut Jeff Ashby, who now serves as ATK's vice president of business development, said one of the segments of the test motor was flown on the space shuttle the last time he went into orbit.

"It dropped into the ocean and was recovered," he said. "I get a kick out of thinking about that."