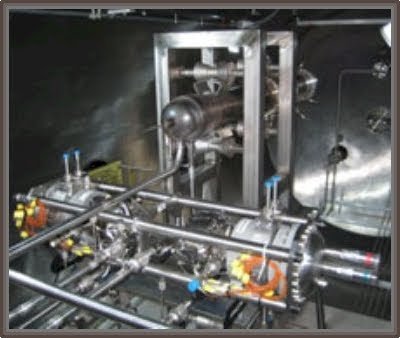 Generating power: A power-conversion unit consisting of two Stirling engines, sitting opposite each other, is set up for testing at NASA’s Marshall Space Flight Center. Pumped liquid metal is used to transfer heat from the reactor to the engines, where it is converted to electricity. (Credit: NASA )
Brittany Sauser
Technology Review (MIT)

Researchers at NASA and the Department of Energy recently tested key technologies for developing a nuclear fission reactor that could power a human outpost on the moon or Mars. The tests prove that the agencies could build a "safe, reliable, and efficient" system by 2020, the year NASA plans to return humans to the moon.

Nuclear power is being considered for lunar and Mars missions because, unlike alternatives such as solar power, it can provide constant energy, a necessity for human life-support systems, recharging rovers, and mining for resources. Solar power systems would also require the use of energy storage devices like batteries or fuel cells, adding unwanted mass to the system. Solar power is further limited because the moon is dark for up to 14 days at a time and has deep craters that can obscure the sun. Mars is farther away from the sun than either the Earth or the moon, so less solar power can be harvested there.

The new nuclear power system is part of a NASA project started in 2006, called Fission Surface Power, that is examining small reactors designed for use on other planets.

Read the feature article HERE.
Posted by Joel Raupe at 6:05 AM