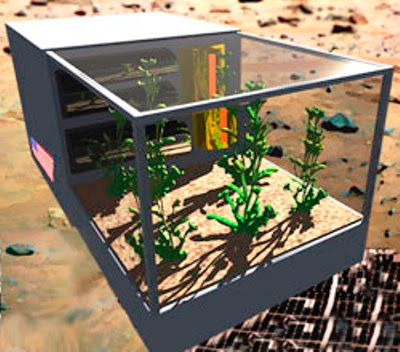 Astrobiology, Based on a Universetoday.com release by Nancy Atkinson
"Imagine a bright flower on a green plant in a little dome-shaped growth chamber, sitting on the landscape of the moon, with the Earth rising up behind," said Taber MacCallum, CEO of Paragon Space Development Corporation. "I think it’s a great vision." That vision of the first moon flower will likely become a reality, perhaps by 2014. Paragon has teamed up with Google Lunar X-PRIZE contender Odyssey Moon to deliver a biological greenhouse to the lunar surface. "We've grown plants in space before, but this will be the first time we'll attempt to grow a plant on another world," MacCallum told Universe Today. "It's not just a great vision, but interesting science, too."

Odyssey Moon is one of the teams vying for the $30M Google Lunar X-PRIZE, a competition for the first privately funded team to send a robot to the moon, travel 500 meters and transmit video, images and data back to the Earth. One image may be the striking vision the MacCallum described.

Paragon has been involved with biology in space for several years. They developed the payload that bred the first animals through their life cycle on board the Mir space station, and also were part of the early commercial biology experiments on the ISS. The company is now working with NASA to develop the thermal control and life support systems for the new Orion and Altair spacecraft which will bring humans back to the Moon.