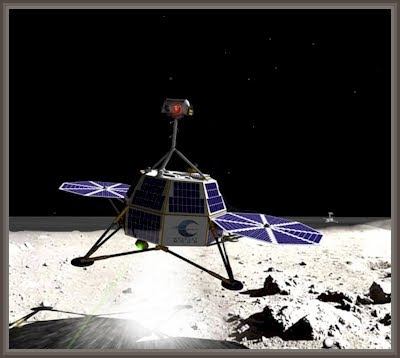 A Hoped-for-Future for Odyssey Moon, with 19 other team in competition for the Google Lunar X-Prize, working to land and complete minimal tasks in mobility and remote sensing. A bonus purse goes to the winning team if, in addition, the winning team acquires real-time data of a genuine artifact of the earlier human exploration. (Odyssey Moon's lander design is based on the Common Spacecraft Bus, under development at NASA's Marshall Spaceflight Center.) Mission planners for the U.K. Mars lander Beagle, lost in December 2003, are apparently in negotiations to fly the groups mass spectrometer on-board the Odyssey Moon lander, pictured here landing near Surveyor 5 (1967), some 23 km northeast of Tranquility Base.
According to Craig Covault of SpaceflightNOW.com, "Collin Pillinger who headed the unsuccessful Beagle Mars project is in discussion with the commercial "Odyssey Moon" program to fly a backup version of Beagle's most powerful instrument on board the Odyssey lunar lander."

Read the Article HERE.
Posted by Joel Raupe at 11:57 PM