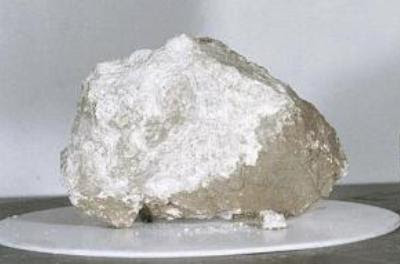 Anorthosite collected from "Stone Mountain" by Young and Duke (Apollo 16) in 1972, part of the Descartes formation. The compound, typical of the lunar highlands and now believed to be the lighter rock originally forming over a moon-wide Magma Ocean, is rich with titanium, bound to oxygen as TiO2.

Dr. Harrison H. "Jack" Schmitt, the only Geologist and professional scientist to visit the Moon, exploring the Taurus-Littrow Valley (a vertible crossroads of lunar morphology, near the southwest Mare Serenitatus) with Eugene Cernan in December 1972, has underplayed the importance of finding water reservoirs at the lunar poles for many years.

The definitive signature of hydrogen, twice as present at the Moon's north pole as the south, and detected by Clementine in 1994 and Lunar Prospector in 1999, are not confined to the permanently-shadowed depths of abyssal polar craters, he reminds us, showing hydrogen is present on the Moon, regardless if confined to water ice or not. While working at the lunar sample receiving laboratory in Houston, until leaving NASA to represent New Mexico in the U.S. Senate, along with many other Dr. Schmitt indicated the presence of oxygen, bound primarily with iron and titanium, in the samples returned to Earth during the Apollo program.

In experiments, primarily using proxies, scientists have repeatedly subjected samples to controlled pressures and heat to produce small amounts of water, in university laboratories for decades.

News comes today, by way of PhysOrg.com, of work by Derek Fray, a materials chemist from the University of Cambridge, who, with help from colleagues, "have built a reactor that uses oxides in Moon rocks as the cathode in an electroche$mical process to produce oxygen."

Lisa Zyga, of PhysOrg, continues, "The design is based on a process that the researchers invented in 2000 that produces carbon dioxide. In this design, the scientists pass a current between the cathode and an anode made of carbon, with both electrodes sitting in an electrolyte solution of molten calcium chloride, a common salt. The current removes oxygen atoms from the cathode, which are then ionized and dissolve in the molten salt. The negatively charged oxygen is attracted to the carbon anode, where it erodes the anode and produces carbon dioxide. To produce oxygen rather than carbon dioxide, the researchers made an unreactive anode using a mixture of calcium titanate and calcium ruthenate instead of the carbon. Because this anode barely erodes, the reaction between the oxygen ions and anode produces oxygen."

"Based on experiments with a simulated lunar rock developed by NASA, the researchers calculate that three one-meter-tall reactors could generate one tonne of oxygen per year on the Moon. Each tonne of oxygen would require three tonnes of rock to produce. Fray noted that three reactors would require about 4.5 kilowatts of power, which could be supplied by solar panels or possibly a small nuclear reactor on the Moon. The researchers are also working with the European Space Agency on developing an even larger reactor that could be operated remotely."

"As a recent story in Nature News reports, other researchers are also developing methods for oxygen extraction. For instance, Donald Sadoway at MIT is working on a high-temperature technique called molten salt electrolysis. Here, the Moon rock is molten and acts as the electrolyte itself. Sadoway's reactor could even be built out of the rubble on the Moon's surface called regolith."

"NASA and the ESA are strongly encouraging this type of research. In 2008, NASA boosted its $250,000 prize to $1 million for the first team to demonstrate a method to extract five kilograms of oxygen in eight hours from simulated Moon rock. So far, the prize remains unclaimed."

(Original credit for news of Frey's work comes from Nature News, in "How to breathe on the Moon.")

Is Situ Resource Utilization (ISRU) is considered an essential area where progress must be made before extended human activity on the Moon. The Space Studies Board, last year, rated NASA's effort in this research work relatively high, though, like progress with mitigating the threat lunar dust is said to pose to a permanent human presense on the Moon, ISRU breakthroughs have sometimes been elusive.
Posted by Joel Raupe at 11:06 PM