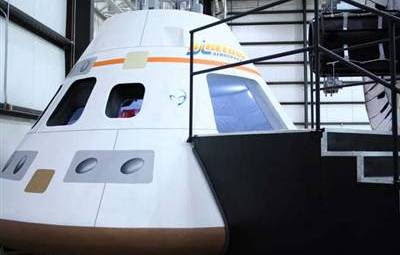 Bigelow Aerospace Orion-Lite - According to reports, officials representing Bigelow Aerospace, with a test inflatible prototype for a proposed low-Earth orbiting hotel in orbit for many months, met privately with members of the Augustine Human Spaceflight Review committee this week, to pitch a cheaper version of the Orion Crew Exploration Vehicle, presumably designed for shorter, low Earth orbiting missions, and without radiation proofing deemed necessary for the redesigned vehicle to travel for long-duration missions, to the Moon and deeper destinations in Space. Bigelow reportedly said their version of Orion could be ready for flight in 2013.
Posted by Joel Raupe at 11:56 PM