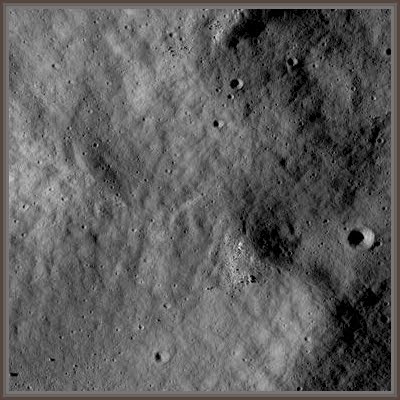 Ejecta apron of Tsiolkovskiy basin forming impact; a crop taken from the stunning close-up taken by the Narrow Angle Camera on-board the Lunar Reconnaissance Orbiter, (LRO), the LROC, operated under the experienced management of Arizona State University,'s School of Earth & Space Exploration. Among the few mare-filled basins on the Moon's far side, Japan's lunar orbiter Kaguya featured HDTV images of Tsiolkovskiy, where MIT and the U.S. Naval Research Laboratory have proposed deploying a unique radio telescope beyond interference from human activities on Earth. In this picture, the massive spill of melted rock from the Tsiolkovskiy event is pictured as never before, down to approximately 80 centimeters per pixel from a strip only 8,400 meters wide. The wave of heated flow almost completely covered an earlier crater, now just barely visible here as "a ghost crater," upper left of center. Nearby, more recent impacts have fallen on top of the flow. The boulder field, right and below of center, would present an expensive hazard to manned and unmanned landers, just as smaller boulders nearly brought about an abort of the Apollo 11 mission, seconds before landing. The latest generation of lunar exploring robots are downloading enormous volumes of important data, presenting a problem of timely analysis that might be solved by spreading that interesting work among a larger pool of people.
From SciBuff.com Science Blog:

Moon Zoo will be another citizen science project, the latest incarnation of the highly successful Galaxy Zoo. The project will use high resolution images from the Lunar Reconnaissance Orbiter Camera (LROC) on NASA’s LRO spacecraft. Moon Zoo will ask the participants to classify and measure the shape of features on lunar surface with the main focus on:

Besides delivering high quality data which will (hopefully) address many questions of lunar science, Moon Zoo will also be an excellent tool to promote lunar and space exploration and engage the public in learning about processes involved in scientific discoveries. Moon Zoo is expected to be even more popular than Galaxy Zoo, exploiting the media exposure of the 40th anniversary of Apollo 11 and the recent NASA’s LRO/LCROSS mission.