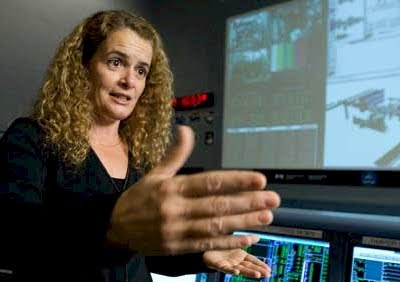 Julie Payette returns to CSA headquarters to a reception numbering three hundred, welcoming her back after her 16 days stay in orbit an on-board the International Space Station.

Longueuil — A fellow astronaut stole her maple cookies, and Julie Payette borrowed the only sweater of Canadian crew mate Bob Thirsk while working last month aboard the chilly space shuttle, 350 kilometres above the Earth.

With behind-the-scenes tidbits and off-world snapshots from her history-making, task-packed 16-day mission to space July 15 to 31, Payette commanded everyone’s attention Friday at the Canadian Space Agency’s headquarters on the South Shore.

It was Payette’s first time back at the mothership of Canada’s space program since the mission, and about 300 CSA employees cheered her as they lined the agency’s modest yet soaring atrium.

Payette said she was grateful for the team’s efforts. In space, she took a group photo of the Longueuil workers against a porthole with the Earth seen below.

Payette, 45, served as the flight engineer on the crew of the space shuttle Endeavour, which flew to the International Space Station.

The crew completed the construction of the Kibo Japanese Experiment Module, also known as the space porch, and installed scientific experiments on it.

Payette didn’t do any of the five spacewalks during the mission, but she played a crucial role at the controls of three robotic arms that grappled equipment stowed in shuttle’s payload bay and then handed it off to another robot arm that then placed it in position with spacewalking astronauts assisting.

Asked if she had any close calls during the robotic operations, Payette said yes.

“I can assure you there usually are when you are handing off pieces of equipment that weigh 600 or 700 pounds and you are bringing them within centimetres of a billion-dollar space station.”