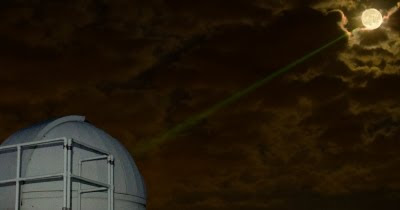 Observatories in Texas (until this year, anyway), New Mexico and France have been busy, shooting the Moon with powerful lasers, with beams widening to a kilometer in width by the time they reach the Moon. Properly situated laser retro-reflector arrays at the landing sites of Apollo 11, 14 and 15, and the Soviet Luna 21 still reflect back results counted literally by the photon. Orbiting spacecraft, most recently Japan's Kaguya, have accumulated millions of datapoints. Adding to LRO's altimeter accuracy, as it more accurately measures its orbital dynamics, is an detector tied into the vehicle's earth-aimed high-gain antenna, designed to record laser pulses from Goddard Space Flight Center in Greenbelt, Maryland.
We've reviewed the importance of lunar laser range reflection work to cosmology; work now being carried out at Apache Point, pushing down to well-within the sub-millimeter resolution, the distance between Earth and Moon. Laser altimeter data has improved upon the work started from the Apollo command and service modules during the final "J" missions, primarily devoted to science, first by Clementine (1994) and recently Japan's Kaguya (2007-2009).

Integral to the accuracy hoped for from a variety of experiments on-board the Lunar Reconnaissance Orbiter (LRO) is another laser altimeter, this time tied to laser pulses fired from instruments house at Goddard Space Flight Center in Maryland. In the context of technological improvements made over the past forty years, not a lot has been written about LRO's laser uplink, and how it works. While waiting for even more spectacular results, during this crucial "first light" and calibration phase of LRO's mission, we invite the Pioneers to review expectations from LRO Laser Ranging.
About LRO-LR

"The objective of the Lunar Reconnaissance Orbiter (LRO) Laser Ranging (LR) system is to enable the spacecraft to achieve its precision orbit determination requirement. The LR will make one-way range measurements via laser pulse time-of-flight from Earth to LRO, and will determine the position of the spacecraft at a sub-meter level with respect to Earth and the center of mass of the Moon. Ranging will occur whenever LRO is visible in the line of sight from participating Earth ground tracking stations. The LR consists of two primary components. The flight system, mounted on the LRO high gain antenna, consists of a receiver telescope that captures the uplinked laser signal, and a fiber optic cable that routes the signal to the Lunar Orbiter Laser Altimeter (LOLA) instrument on LRO. The LOLA instrument receiver electronics record the time of the laser signal based on an ultrastable crystal oscillator, and provide the information to the onboard LRO data system for storage and/or transmittal to the ground through the spacecraft radio frequency link. The LR ground system consists of a pointable laser device at a satellite laser ranging station that times and transmits the laser pulse, a data reception and distribution facility, and the LOLA Science Operations Center. Positioning by the LR will enable the determination of a three-dimensional geodetic grid for the Moon based on the precise seleno-location of ground spots from LOLA."
Posted by Joel Raupe at 11:21 PM