Moon Base One: Sundown 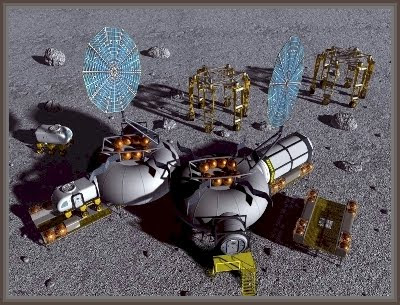 As already noted, storing power for the 14 days of darkness each lunar month is a serious problem. It will NOT be dark, for the initial “nearside” camps, because Earthshine is quite bright! The “half Earth” conditions near sunset and sunrise will be about 10 times as bright as a “Full Moon”, with no clouds to reduce the light. “Full Earth” at the middle of the lunar night will be at least 30 times as bright as a conventional “Full Moon” in Earth's clear sky. You won't need lights outside, but you will certainly need them in the habitat!

Since the brightness mentioned is more than 1000 times dimmer than direct sunlight, solar power production is effectively zero. Power will have to be stored. Since all such processes have inefficiencies, it will be good to double my initial Solar Power plan, using 6 kg of thin cells, rather than only 3kg. More than 10KW peak power will be produced, with an ample 3kw Day/Night average. This also provides insurance against solar cell damage and degradation. Battery power storage of course springs to mind, but it is virtually useless, except for short time emergency use! The sun will be down 336 hours each cycle. Very good Lithium Ion cells can hold about 170 Watt Hours per kg mass. But this barely provides ½ watt average power output, per Kilogram, for the 14 days of darkness. A modest 500 Watt average power would require One Ton of lithium cells, even if the full capacity could be tapped each cycle for one hundred cycles (8 year desired life). A much better power storage system is needed.

An interesting possibility would be to store heat in a buried volume of lunar rock. The lunar “crust” has modest thermal conductivity (as shown by the lack of thermal cycling 80 cm below the surface). Heat transfer is even lower under loose regolith fill. The heat could be recaptured when the sun is down with a variety of heat engines. But that will wait for later.

Read the full posting HERE.
Posted by Joel Raupe at 12:17 AM