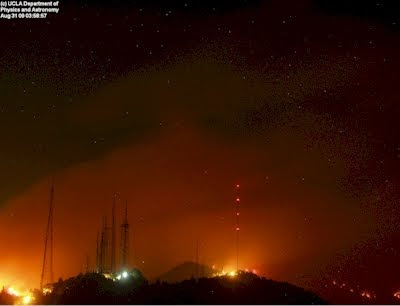 Sporadic and overloaded, the 30 meter high Mt. Wilson Towercam was still occasionally loading images before dawn, this morning, after the Station Fire had raged up the western flanks of the historic site, location of broadcast towers for six television stations, among others. It is also the location of the Mt. Wilson Observatory and the Hale Telescope, for decades the world largest, the Hubble Space Telescope of its era, often pictured with Edmund Hubble at its foci.
Posted by Joel Raupe at 12:03 PM