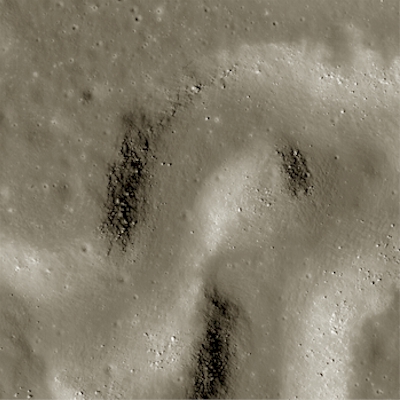 Sinuous rille winding its way across a much larger rille in the heart of the Aristarchus Plateau, image width 1.76 km [NASA/GSFC/Arizona State University]

Vallis Schröteri, the largest rille on the Moon, originates on the Aristarchus Plateau and is ]comprised of three key morphologic features (below): the Cobra Head, the primary rille (155 km long), and the inner rille (204 km long). Rilles are believed to have formed as large volumes of very fluid magma erupted and flowed rapidly from the vent. Scientists are not certain how rilles are formed - that's one of many questions that future human lunar explorers will answer. Experts currently think that molten lava may carve a channel into the lunar surface (erosional model), or levees may form at the margins of the flow confining it (constructional model). Some lunar sinuous rilles may have started as collapsed lava tubes and were later modified to their final form. Lunar sinuous rilles do form by volcanic eruptions, but the details of how they get their "river-like" shape are also a mystery. The LROC NAC frame (above) shows a section of the inner rille about halfway down its length where it is about 600 m wide and the primary rille about 4300 m. LROC will provide high resolution stereo images of many lunar rilles to help scientists discriminate between the competing models of formation. The geologic complexity of Aristarchus Plateau and its rich, easily accessible deposits of potential resources make it an exciting landing site for future human exploration missions.

Explore the full Apollo Metric frame of Vallis Schröteri and the Aristarchus Plateau.