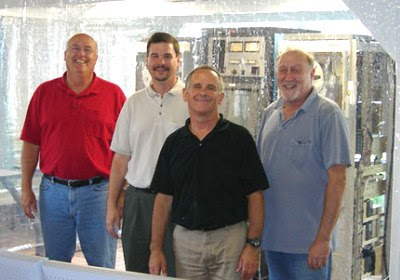 Members of the Miracle Moon Team pose before the components of a sorely needed Clean-Room donated by Lockheed-Martin to the Lunar Orbiter Image Restoration Project (LOIRP), housed in a former McDonald's fast-food restaurant near Moffitt Field, home of NASA Ames Research Center in California. Using astounding reconstructed tape drives and modern digital technology, LOIRP has begun the painstaking, line-by-line translation of photography shot, developed, scanned and then transmitted back to Earth, in lunar orbit, more than forty years ago.

LOIRP's rendering of the deteriorating taped transmissions from the U.S. Lunar Orbiters (1966-1968) have been shedding new light on these unique photographs, adding an important dataset to the renewed international effort to explore the Moon. Among only a few possibilities, lunar and planetary scientists will now have a method of tracing changes to the lunar surface over a relatively significant period.

(Though, as Apollo 17 veteran and former U.S. Senator Harrison H. "Jack" Schmitt recently mentioned, however, NASA faces a significant challenge storing both new and old data from the fleet of interplanetary probes that will continue to be studied, making possible new discoveries, long after their missions have ended.)

From the LOIRP Moonviews.com Lockheed-Martin donation announcement, "Lockheed Martin Corporation has donated the labor required to erect a class 10,000 clean room to the Lunar Orbiter Image Recovery Project (LOIRP). This clean room will help protect our refurbished 1960's era Ampex FR-900 tape drives from the environment inside NASA Ames Research Park Building 596 aka "McMoons", which was originally constructed to house a McDonalds restaurant."

"In the 1960's these tape drives were operated in an old style computer room, with raised floors ultra-clean air, and constant air conditioning. Since our building's air conditioning system was sized for the heat of the kitchen and lots of customers, we are able to maintain the temperature to near optimum conditions. However, dust and dirt are still a problem with the finely tuned machine."