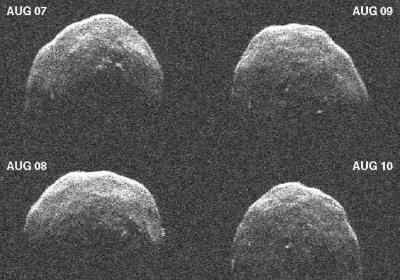 Arecibo radar images of 2-kilometer-diameter asteroid 1992 UY4 made from four days’ observations in August 2005. Radar images are unusual in that the coordinates are not spatial ones on the plane of the sky. Rather, radar images are in delay and Doppler coordinates, corresponding for each pixel to its (relative) distance from us and its (relative) radial velocity, determined, respectively, by the time delay and Doppler shift of the echo. The delay (distance) resolution for these images is ~5 nanoseconds (7.5 meters, one-way), and the Doppler (velocity) resolution is 0.029 Hertz (~0.2 centimeters/second). The delay coordinate is vertical and the Doppler coordinate is horizontal. SOURCE: Lance Benner, Jet Propulsion Laboratory, California Institute of Technology.

According to a new interim report from the National Research Council, "NEAR-EARTH OBJECT SURVEYS AND HAZARD MITIGATION STRATEGIES," NASA’s current near-Earth object surveys will not meet the congressionally mandated goal of discovering 90 percent of all objects over 140 meters in diameter by 2020. Funding for near-Earth object activities at NASA has been constrained, with most costs being met by funds from other programs.

A final report to be released later in 2009 will expand on the interim report with findings and recommendations on detecting, characterizing, and mitigating the hazard of near-Earth objects.

Download the Report from NAP.edu, or,
Mirror Site (no registration necessary), HERE.
Posted by Joel Raupe at 8:05 PM