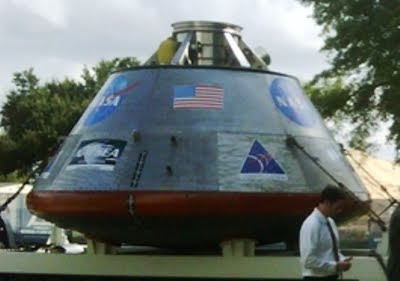 Orion CEV Block One Mock-Up arrives in Pensacola, Monday, where it was viewed by enthusiastic crowds at the Naval Air Station museum. Next Stop, on its way to Kennedy Space Center, Stennisphere.
A full-scale mockup of NASA’s Orion crew exploration vehicle will be on display for free public viewing Wednesday from 10 a.m. to 2:30 p.m. at StenniSphere, the visitor center at NASA’s John C. Stennis Space Center.

The mockup is used in tests to study the environment for astronauts and recovery crews after an Orion ocean splashdown. It is being moved from Florida to Texas to continue its testing, but is stopping at Stennis and other locations for public viewing en route.

The first round of Post-landing Orion Recovery Tests (PORT) occurred in March in a controlled water environment at the Naval Surface Warfare Center in Bethesda, Md. Additional testing near NASA’s Kennedy Space Center in April took place in the rougher, uncontrolled waters of the Atlantic Ocean. The next testing phase, designated as PORT II, will be conducted at Johnson Space Center in Houston.

“The first portion of PORT testing was a great success, giving NASA an early look into the motions crews inside and outside Orion will feel after landing,” said Alan Rhodes, PORT testing lead at Johnson. “This will allow us to modify the design to aid in the recovery of the vehicle and crew.”

At Johnson, the PORT test article will be outfitted with seats, restraints and other items that may affect how crews get in and out of Orion. Engineers will evaluate the crew’s ability to get out of Orion in calm water at the Sonny Carter Training Facility’s Neutral Buoyancy Lab. NASA will also work with U.S. Air Force rescue and recovery experts to determine how parajumpers will assist crews in case of an emergency.

NASA’s Constellation Program is developing America’s next-generation human spaceflight system to carry astronauts to the International Space Station, the moon and destinations beyond.