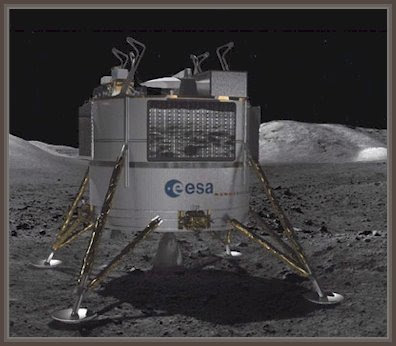 An autonomous lunar lander, which is capable of delivering payload to the lunar surface in support of a human presence on the Moon, as well as payloads directly supporting European exploration objectives. - ESA

The European Space Agency is seeking input from industry, engineering and science interests on the design of what may be the backbone of the middle range of NASA's lunar precursor robotics mission, the International Lunar Network.

"They helped to define the multiple and varied building blocks needed to return humans to the Moon, and to support a sustained presence there."


At Ministerial Level, "funding was approved for ESA to work towards launching a lunar lander in the 2017–20 timeframe within the European Transportation and Human Exploration Preparatory Activities program and the Global Exploration Strategy (GES)."
This mission builds on lunar exploration comparative architecture analysis studies recently conducted in cooperation with NASA. They helped to define the multiple and varied building blocks needed to return humans to the Moon, and to support a sustained presence there.

Key elements identified in these studies include:
The latter was identified by both ESA and NASA as a possible European contribution to a future international programme of lunar exploration and would take the form of a lunar Cargo Lander.

This Cargo Lander would deliver items such as food, water, oxygen, fuel and equipment to the Moon, in order to enable astronauts to stay for extended periods. It could also be useful during the construction of a permanent human lunar base.
In addition, ESA is also studying a precursor Lunar Lander mission, for which different mission options are under consideration, to develop and demonstrate the required capabilities. The primary goal is the advancement of European human exploration capabilities for contribution to the international lunar exploration effort. The mission also provides an opportunity to characterize the lunar environment and the landing site, as well as a platform for scientific research.

In order to ensure a robust mission definition and to draw on the wealth of relevant experience available, ESA invites the science, technology and industrial community (including non-space industries) to provide inputs to the project through a Request for Information (RFI).
In particular, ESA is interested in learning about technologies, instruments, techniques and experiments that could be accommodated on the Lunar Lander and are in keeping with the mission objectives:
These inputs will be used in the early design phases of the mission, in advance of a formal Announcement of Opportunity.

The RFI began on the Monday 2 March 2009 and remains open for six weeks until 10:00 CEST (08:00 UT) on Tuesday 14 April. Further information on the RFI, including a concept submission template and the review and selection process, can be found in the links on the right side of the page. Responses to the RFI should be sent to: explorationcall@esa.int.