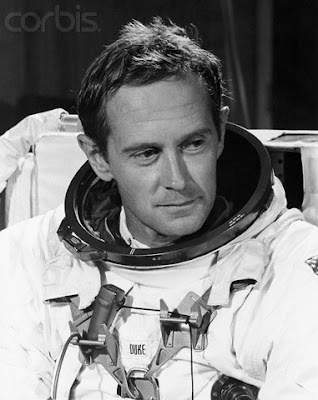 He was the tenth and youngest man to walk on the Moon in April 1972, serving with Commander John Young as lunar module pilot on Apollo 16. His most famous role, oddly enough, may be one he is least credited with, the first human to talk with another human on the Moon while serving as capcom during the landing Apollo 11 landing, three years earlier.
"Roger, copy you down Eagle. You got a bunch of guys about to turn blue, we're breathing again," Duke said, acknowledging Dr. Armstrongs confirmation that, "the Eagle has landed."
A few days shy of the 37th anniversary of his and Young's exploration of the northern reaches of the Descartes Formation, Brig. General Charles M. Duke, Jr. (USAF, Ret.) is scheduled to speak on “The Adventure of the Apollo Moon Landings” April 7 on the campus of Texas State University in San Marcos.
Read more HERE.
Posted by Joel Raupe at 3:53 PM

Hi, Joel. Love your blog. I am one of a very few women aerospace engineers on Apollo. We worked for the contractors-not NASA. We were the first in history. I am also an astronomer. Just published a book for young adults/teens, "The Biggest Explosions in the Universe". It is for sale on Amazon, AbeBooks and other sites. If I send you a cover picture and link would you post it on your site? I would be ever so grateful. Amazon has given me 5 stars. Thanks,
Sara Howard
www.InsideTheApolloProject.com