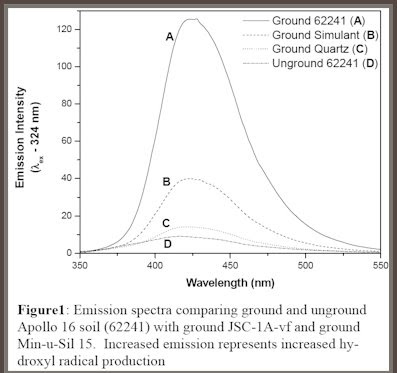 The decision to return humans to the moon by 2020 makes it imperative to understand the effects of lunar dust on human and mechanical systems.( Bush 2004; Gaier 2005; Mendell 2005) During the Apollo missions, dust was found to cause numerous problems for various instruments and systems.

Additionally, the dust may have caused health issues for some of the astronauts.(Gaier 2005; Rowe 2007) It is necessary, therefore, for studies to be carried out in a variety of disciplines in order to mitigate the effects of the dust as completely as possible.

Due to the lack of an atmosphere, there is nothing to protect the lunar soil from ultraviolet radiation, solar wind, and meteorite impacts.

These processes could all serve to "activate" the soil, or produce reactive surface species. In order to understand the possible toxic effects of the reactive dust, it is necessary to "reactivate" the dust, as samples returned during the Apollo missions were exposed to the atmosphere of the Earth.

We have used grinding and exposure to UV radiation in order to mimic some of the processes occurring on the lunar surface. To monitor the reactivity of the dust, we have measured the ability of the dust to produce hydroxyl radicals in solution. These radicals have been measured using a novel fluorescent technique developed in our laboratory,(Wallace et al. 2008) as well as using electronparamagnetic resonance (EPR).
We have measured the reactivity of ground lunar dust, lunar simulant, and quartz using a fluorescent assay. The ability of the ground lunar dust to produce hydroxyl radicals is much greater than ei-ther lunar simulant or quartz. These results are impor-tant, as grinding can act as a surrogate for meteorite impacts on the lunar surface. Additionally, we have studied the dissolution of lunar simulant in buffer solu-tions of different pH. Lower pH causes a number of different ions to be leached into solution at much higher concentrations, as does grinding of the materi-all. While these studies have not shown the presence of toxic materials or sufficient concentrations to be harmful, similar studies on lunar dust are necessary and will be performed soon.
LPSC XL (2009) #2483
Posted by Joel Raupe at 11:07 PM

I have published recently the fact that--with access to the data of only 4 of the 12 moon walkers--all 4 returned with abnormal stress tests, consistent with temporary impairment in cardiac function. A major factor contributing to the vulnerability of the lining of their blood vessels,are the invariable deficiencies of magnesium ions,elevations of adrenaline and vicious cycles. Rowe WJ Moon walkers and urban pollution Am J Med 2013,126:e1-e2.