Webb Sunshield has SPF of 1.2 million 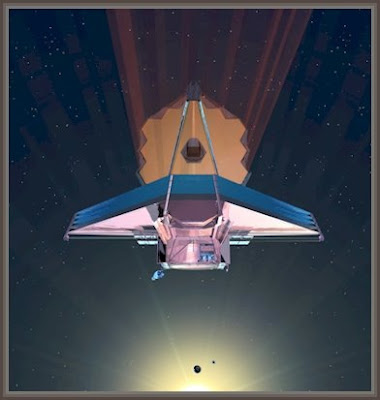 Wolfgang Gruener of TGDaily reports NASA's James Webb Space Telescope will be fitted with a new sunshield Northrup Grumman claims has the equal to 1.2 million Sun Protective Factor.
NG recently completed a preliminary design review of the sunshield membrane that's the size of a tennis court and shaped like a beach umbrella.

The shield is designed to block solar radiation and help the observatory operate at cryo temps. Schedule for launch in 2013. JWST should detail those galaxies that formed at the end of the Cosmic Dark Age, 300 million years after the Big Bang.
With its resolution of electro-magnetic frequencies largely unabsorbed by clouds and dust, JWST should solve enduring questions as to the true extent of extra-galactic dust, and why ground and space measurements of very energetic cosmic rays indicate less attenuation and more cosmic rays than there should be.

Exploring the region between the Cosmic Background heat and the emergence of galaxies, the so-called Dark Ages, awaits the radio quiet and large baselines possible for telescopes astronomers hope to build on the Moon's Far Side.
Posted by Joel Raupe at 5:57 PM