Technologies for landing on the Moon 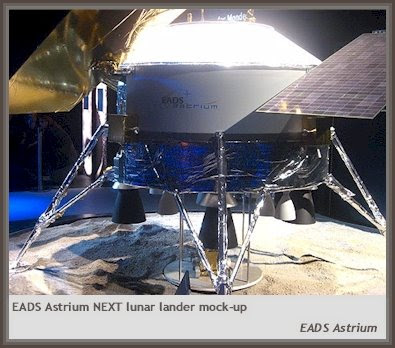 The United States have been to the Moon and want to go again, China and India have recently launched their own lunar missions, and Europe is looking at the possibility of future missions to Earth’s natural satellite. Astrium is working on a European Space Agency (ESA) study: ‘NEXT Lunar Lander with In-Situ Science and Mobility’.

The NEXT Lunar Lander study is in two phases. “In the first phase, we defined the baseline for a mission concept,” explains Dr Peter Kyr, who is leading the study at Astrium Space Transportation. “This mainly concerned the transfer strategy, the descent, landing, mobility, lunar surface operations and the issue of weight distribution between the lander and the Moon rover.” The results of the first phase were presented to ESA in July 2008. In Phase 2, the complete mission concept is now being finalised, and the design of the transfer module, the lander and the Moon rover is being developed.
An excellent, brief concept analysis HERE.
Posted by Joel Raupe at 6:21 PM