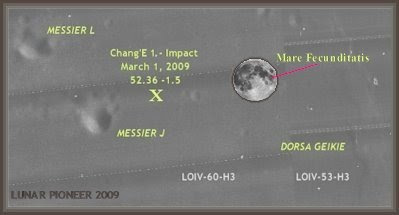 Hat Tip to Svetoslav Alexandrov for alerting this late sleeper to the news that China's first lunar orbiter Chang'E 1 was brought down or "landed" (if crashed or impacted is not to your liking) according to news sources close to 52.36 east, 1.5 degrees south of the lunar equator.
The impact sight is within seven kilometers east of Messier J, a secondary crater among the wide and scattered Messier group, in north central Mare Fecunditatis, or "Sea of Fertility"

Telescopic observers can spot Messier J, with it's neighbor Messier L, a few kilometers northwest. Both are located 150 kilometer east of Messier proper, and its more familiar oblong neighbor with the westward pointing ray, Messier A.

The Messier J and L secondaries are located where the wrinkle ridges Dorsa Geike from southward meet those ridges winding south associated with Dorsum Cateux.
If the skies are clear where you are tonight, the phase angle of the sun at the location of the Change'E impact area, Messier A and its ray might be an excellent place to start looking eastward, halfway between the terminator and rim, more of less. The ray of Messier A points back to its crater of origin, and immediately to its east is Messier proper. Continue east and the meeting of the ridge groupings and the secondaries might just be a good opportunity for historic observation. Though the evenings of February 27 and 28 would have been perfect

Phil Stooke reminds us that this, among nearly seventy locations of human activity over the lunar surface since 1959, is "another point on the map" ... about 140 kilometers west (by southwest) of the (September 1970) Luna 16 landing site."
Posted by Joel Raupe at 10:29 PM