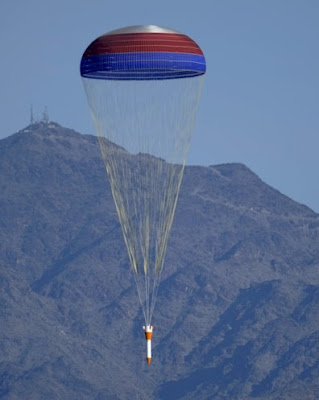 NASA and U.S. Air Force test pilots have just dropped a 50,000-pound "dummy" rocket booster on the Arizona desert--and stopped it before it crashed.

It's all part of NASA's plan to return to the Moon.

"NASA's new Ares moon rocket is going to have a reusable booster stage that we plan to recover after each mission," explains James Burnum of Marshall Space Flight Center. "To 'catch' the booster before it crashes back to Earth, we need a super-reliable parachute system."

Chief pilot Frank Batteas of Dryden Flight Research Center helped a NASA-led team test one of the super-chutes on Feb. 28th, and he offers this account:

"We flew at 175 knots at 25,000 feet, and dropped one of the heaviest payloads a C-17 has ever carried – a 50,000 pound stand-in for the spent Ares booster," says Batteas. "A lot of things have to happen correctly for such a test to be successful. A great deal of teamwork, among NASA, the Air Force, the Army, Boeing, and others, goes into planning and executing events both inside and outside the plane."
Details from RedOrbit HERE.
Posted by Joel Raupe at 11:48 PM