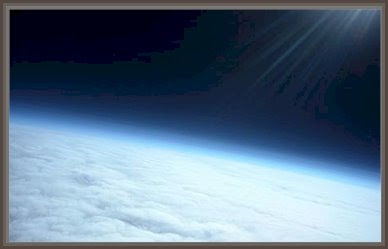 Maybe the Romanian Google X-Prize team, ARCA, that reportedly wants to launch their entrant lunar rover from balloon, are on to something.

From FoxNEWS and the Daily Telegraph, this evening, comes news that the Meteotek team of IES La Bisbal school in Catalonia, Spain completed an "incredible experiment" at the end of February. Using $140 in equipment, the teens lofted a camera over 100,000 feet, over 20 miles into the lower stratosphere and, if you can believe your eyes, photographed the better part of Earth's atmosphere from the edge of space.

Of course, though they are being credited with having taken pictures from Outer Space itself, they are two-thirds shy of the official boundary of 100 kilometers, or 62 miles, but, none-the-less, it is no small achievement. It shows, at the very least, that bringing down the cost of one pound of material to the Moon or even into low earth orbit might be possible, some day, by and by.

After all, the U.S. and U.S.S.R. paid plenty to attain achievements like this one sixty years ago. Then again, the "cheap" CCD digital camera, radio control, the materials that made up the balloon, etc., would not have been available were it not for the expensive attainment of such everyday technology during the Apollo Era and afterward.
The story from The Telegraph
Posted by Joel Raupe at 3:45 AM