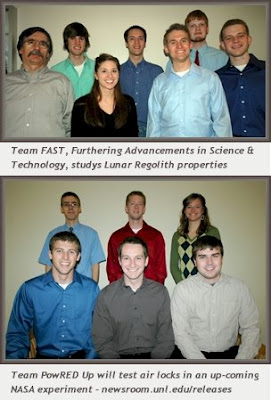 It's the closest thing to outer space without leaving the Earth's atmosphere, and this month, 11 UNL students and two professors will get to experience it.

The men and women earned a trip on NASA's "Weightless Wonder" C-9 aircraft. They will work on scientific experiments while on the flight.

Yet they can't help but relish what they expect will be the sheer joy of escaping gravity.

Team leaders Jack Mondry, 21, a senior from Orlando, Fla., and Brett Schlueter, 22, a senior from Hastings, Neb., plan to do their fair share of back flips and one-handed push-ups.

"I can't imagine what weightlessness will feel like," Schlueter said. "When you push everything out of your head about testing and designing and think about being weightless, it's going to feel amazing walking onto that plane, knowing what's going to happen."

Two teams from UNL were among 10 college teams from across the country chosen for NASA's Microgravity University, which gives college students the opportunity to work and play in a space-like weightless environment.

The plane's ascents and dives create 18 to 25 seconds of ‘"parabolic reduced gravity," approximating lunar gravity, which is one-sixth of that found on Earth.

That means a 180-pound person would feel as if he or she had shed 150 pounds.