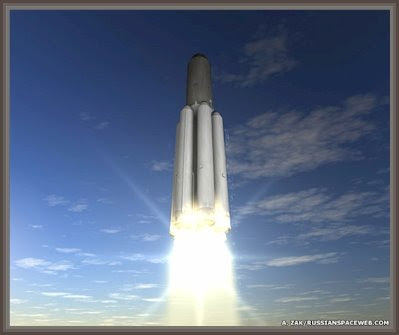 For only the second time since the disintegration of the Soviet Union the Russian Federation is preparing to choose a new booster design, a heavy lift designed to carry 25 tons into Earth orbit and man-rated to ferry cosmonauts to Earth's Moon.

The only true heavy-lift boosters presently in operation are ESA's high-performiance Ariane V and the Space Shuttle, now only eight missions away from a scheduled retirement in late 2010.

According to a report from the Anatoly Zak, science reporter for BBC News, "Russian space officials say the yet-to-be-named rocket should carry its first manned spacecraft in 2018.

In 2008, Roscosmos finally started quietly soliciting proposals from the industry to develop a brand-new rocket which could support lunar expeditions. All major Russian space firms reportedly vied for the government contract to build the vehicle.

While Roscosmos had never publicised details of the bidding process, a number of Russian space officials hinted that they were close to choosing a winner at the beginning of 2009.

On 14 March, Alexander Chulkov, head of the rocket and launch facilities directorate at Roscosmos, told BBC News that the agency would pick a winner by March 25.

"We have a bidding procedure, under which we made a request for proposals and now will be reviewing those proposals to determine a prime developer, based on the most interesting project from the cost-effectiveness point of view," Mr Chulkov said.
Read the BBC Report HERE.
Posted by Joel Raupe at 4:56 AM