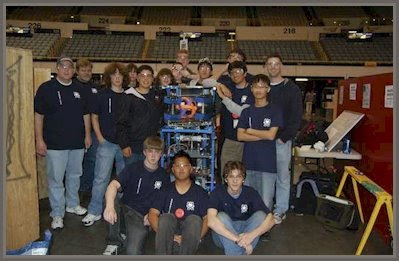 Following a "lunacy" theme, 61 high school teams from Southern California, Arizona, Brazil and Chile challenged each other on a "lunar crater" roughly the size of a tennis court, scoring points by launching balls called "moon rocks," "empty cells" and "super cells" into the containers of the opposing teams' robots.

The West Ranch team placed 13th among 62 schools and made it to the first round of the elimination playoffs.
Posted by Joel Raupe at 1:46 AM