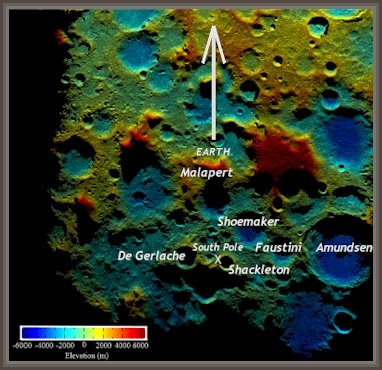 If, as planned, the United States eventually establishes a lunar base in 2020, one of the most tempting patches of moonscape is Shackleton Crater at the south pole.

There may be water ice for drinking or converting to rocket fuel, the nearly constant sunlight at the rim is ideal for solar power, and the temperature is relatively bearable.

But perhaps the most compelling reason is something far more primal: surviving the lunar night, which lasts 14 Earth days and can hit temperatures so cold that oxygen turns to liquid.

Amid the many challenges that face America's bid to send four astronauts to inhabit a moon base for 180 days at a stretch, the lunar night is among the hardest to unravel - and for now, scientists think the rim of Shackleton Crater might be the best place to find solutions.

"If you want to explore the moon, you have to start with the first requirement: surviving a lunar night," says James Head III, a planetary geologist at Brown University.

The goal to return humans to the moon by 2020, first established under President Bush, appears to have President Obama's approval. Between his fiscal 2010 budget proposal and the stimulus package passed by Congress, the National Aeronautics and Space Administration (NASA) is slated to get roughly $2.4 billion more than it received in 2008. The 2010 deadline for retiring the space shuttles remains intact. So does the lunar-exploration program, with its rockets to replace the shuttles.

But for all its attractiveness as a steppingstone from Earth to Mars, the moon is one nasty place, explains Narayanan Ramachandran, an aerospace engineer who heads the American Institute of Aeronautics and Astronautics' Space Colonization Technical Committee.

The allure of Shackleton Crater is that it is relatively hospitable and practical. Explorers perched on its rim would experience a night of only 2 Earth days and 4 hours. The crater's proximity to the moon's day-night boundary - called the terminator - also makes it an ideal place to test technologies and find out what works and what doesn't in both environments.

The difficulties to overcome are many. Solar storms and cosmic rays bombard the daylight half of the moon with charged particles dangerous to humans. Cosmic rays continue the onslaught throughout the night. And the particles smack the lunar surface with enough energy to knock neutrons loose and send them speeding upward - another form of radiation.

Lunar dust is another serious problem. On Earth, dust gets tumbled around, rounding its edges, and moisture in the atmosphere makes it easier to clean off. On the moon, however, those processes do not exist, meaning the grains of the surface soil, or regolith, remain jagged. And with no moisture to prevent static electricity from building up on the grains, they provide the ultimate example of static cling - on everything from spacesuits to rover batteries.

Yet during a recent conference for firms interested in building the lunar outpost, a significant amount of attention turned to surviving the lunar night. Satellites in the right orbit could gather sunlight, convert it to microwaves, then beam the microwaves to a facility on the surface that would convert the beams into electricity. Other groups touted small nuclear reactors whose heat would be converted to electricity required for heating and other needs.

But the cost of getting such big-ticket items to the moon, as one expert puts it, is "one followed by too many zeros."

This has led some engineers to explore a live-off-the-regolith approach - taking advantage of the positive side of lunar dust: It stores heat.

Specifically, the top four inches of the regolith absorbs sunlight and heats up. Lunar explorers could harvest this material and fashion it into large bricks. Using special lenses, they could intensify the sunlight striking the bricks, heating them to temperatures far higher than they could reach with sunlight alone. Then the heated bricks could be kept insulated and used for heating habitats during the long night.

But habitats aren't the only pieces of hardware that must be warmed. Robotic rovers and their batteries also need to survive. "We have a hard time keeping ... trucks working in Siberia," Dr. Ramachandran says. "We have no experience working at minus 150 degrees."

The solution could be a "wadi" - a patch of lunar surface somewhat larger than a rover and covered with what is in effect a reflective tent. During the day, lenses would heat these strategically spaced wadis. As night nears, hardware would extend a reflective cover over the area - like tin foil over a turkey, shiny side down.

Engineers calculate that wadis would be warm enough to prevent lubricants from freezing and batteries from dying. The concept also could be applied to habitats on wheels, which would allow astronauts to explore.
Posted by Joel Raupe at 11:40 PM