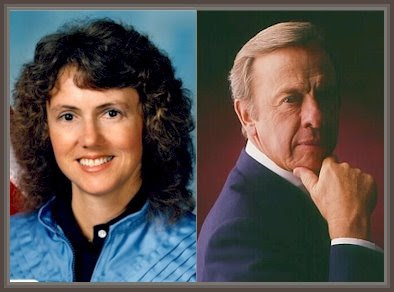 The McAuliffe-Shepard Discovery Center Friday in Concord, New Hampshire, honoring star-crossed "Teacher in Space" Christa McAuliffe (1948-1986) and Admiral Alan Shepard (1923-1998), the first American in space and fifth man to walk on the Moon as commander of Apollo 14.

With its observatory dome and 92-foot full-scale mockup of the rocket and capsule that carried Shepard into space in 1961, the center dwarfs the original planetarium. Its programs do the same.

McAuliffe's mother, Grace Corrigan, said McAuliffe would be proud to be linked with Shepard, whom she considered a hero.
Posted by Joel Raupe at 6:24 PM