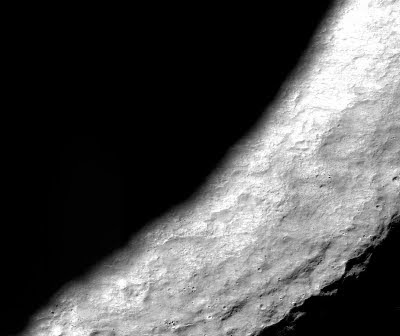 Shackleton Rim. A first public release of this most detailed image from the LROC Narrow Angle Camera (NAC) shows the Rim of Shackleton Crater, immediately adjacent to the South Pole of the Moon.
LRO: Moon's South Polar region 'cold, frosty,
and hydrogen-rich,' even outside it's lingering shadows -
just as pluckly Lunar Prospector 'seemed to show'
ten years ago.

From Andrew Gaddis, LROC News System at Arizona State, "on September 15, LRO successfully executed its Mission Orbit Insertion (MOI) propulsive maneuver which established the nominal mission orbit. This means the LRO cameras are now in a 50km polar mapping orbit of the Moon, which will result in higher resolution images."

Some areas within the Moon's PDR's hover at 35 degrees K, and are easily among the coldest regions in the Solar System, and certainly as cold as anything known to naturally occur within the inner solar system. (This testifies to the low thermal conductivity of the materials that make up the Moon's surface, and how long these PDR's have escaped direct contact from solar energy.)

In additon, LRO Russian-built LEND neutron spectrometer, after only 60 days of operation, has already confirmed the hydrogen signatures found at the 30 kilometer wide, 1 meter deep resolution demonstrated by the Lunar Prospector survey in 1999.
As with Lunar Prospector, LRO finds an abundance of hydrogen within Permanently Darkened Craters inside the Moon's polar PDRs, and also the same hydrogen abundance found by Lunar Prospector outside the Moon's PDR's, at higher latitudes.
The hydrogen detection signature discovered by LRO's LEND discovered within Cabaeus A was a factor in the choice of this crater as the target for the LCROSS impact on October 9.

The most sensitive of LRO's experiments, the Lyman-Alpha Mapping Project (LAMP), an "extrodinarily sensitive UV detector, sensitive to frost," was the last experiment switched on as LRO neared it's mapping orbit within the past week. During passes over Faustini and Cabeus A LAMP detected "a distinct darkening" on the crater floors, "possibly due either to a surface texture effect" or the frost the experiment was designed to detect on the Moon's surface.
The LRO's Cosmic ray detetor, CRaTER, is working "very well," having shown the expected rain of GCR's coming into the inner Solar System from outside, as expected during the present unusually deep solar minimum. The detector also showed the shadowing by the Moon of half the Cosmos during close passes by the Moon's South Pole in it's commissioning orbit.
Posted by Joel Raupe at 6:38 PM